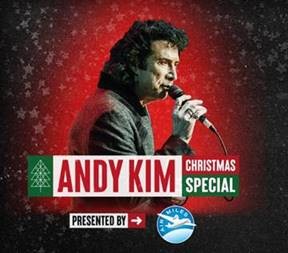 The 16th Annual Andy Kim Christmas Special, presented by AIR MILES, which nationally aired on December 19th and December 24th on Citytv, Citytv.com, allowed viewers to donate while watching the special and raised over $190,000* for Crew Nation, CAMH Gift of Lights and Food Banks Canada. AIR MILES also gave viewers the chance to donate Miles towards rewards that directly benefitted Food Banks Canada and raised over $40,000.

“Work is just work unless there is The Purpose. I’m lucky and blessed to have been alongside the inspired who understood helping those in need was paramount during the 2020 Christmas and Holiday Season. Every artist I asked to donate their time and perform a song for our Christmas Special said yes because of the idea of helping others. Whether we do this again or not, I’m thankful to everyone for their time and commitment, and to everyone watching the show at home,” Andy Kim said.

The two-hour music special was broadcast from Toronto’s one and only, El Mocambo on December 19, which reached over 2.5 million viewers and re-aired on Christmas Eve with over 2.3 million Canadians tuning in.
The special was hosted by Sportsnet host and Juno-nominated musician, Tara Slone as well as Cityline host Tracy Moore, and gave Canadians a classic variety entertainment show over the holidays. Performances included some of the country’s most sought-after singer/songwriters and performers: Andy Kim, Barenaked Ladies, Broken Social Scene, Buffy Sainte-Marie, City and Colour, Glass Tiger & Roch Voisine, Jully Black, Kardinal Offishall, Ron Sexsmith, Sam Roberts, Sarah McLachlan, Serena Ryder & William Prince throughout the special.