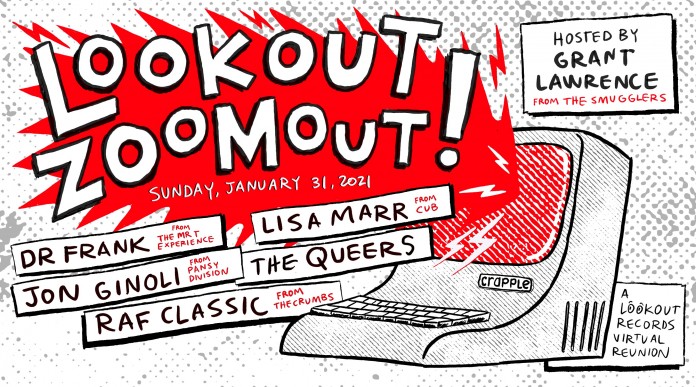 The reunions will bring together the singers and songwriters from Lookout Records, the iconic Berkeley, California pop-punk record label founded in 1987 by Larry Livermore and David Hayes. Until its demise in 2012, the label had one of the most recognizable logos in the world, and was most notable for bands like Green Day, Operation Ivy, the Donnas, the Mr. T Experience, and Screeching Weasel.

The Smugglers and cub were the label’s only Canadian artists.

“If your band was lucky enough to land on Lookout Records like ours did in the 1990s, it felt like winning the lottery”, states the Smugglers frontman Grant Lawrence, who will lead the conversation between performances. “It was an incredible community of artists, bands, and friends. It didn’t end well, but there were some amazing times and some really, really great records while it lasted.”

The first Lookout Zoomout will occur live on Sunday January 31 at noon PT / 3pm ET and promises to be an interactive experience with fans from around the world. Tickets are available now: https://sidedooraccess.com/shows/7neh5hsekDcH5hDgy3YI.

– Grant Lawrence from the Smugglers… the lead singer of the Vancouver garage rock ‘n’ roll band that was on Lookout from 1995-2005. “Selling the Sizzle”, the band’s highest selling record, was released on Mint Records in Canada and Lookout internationally in 1996.

– Lisa Marr from Cub … the front woman of the “cuddlecore” all-female sensations from Vancouver BC, Lisa sings with a smile in her voice and has always had an incredible knack for hooks. cub’s final album “Box of Hair” was released on Mint Records in Canada and Lookout internationally in 1996.

– Dr. Frank from the Mr. T Experience  … arguably the architect of modern pop punk in sound and lyrics, Dr. Frank and his Berkeley-based band were on Lookout longer than any other artist.

– The Queers … over the course of 40 years, Joe Queer and his black leather jacket-clad band from Portsmouth, New Hampshire have released a string of popular bubblegum punk rock records, none better than “Don’t Back Down” on Lookout, which celebrates its 25th anniversary this year.

– Jon Ginoli from Pansy Division … the lead singer of the first openly gay punk rock band on the planet.

– Raf Classic from The Crumbs … from Miami, Florida, the Crumbs were arguably one of the most underrated punk rock ‘n’ roll bands in Lookout’s entire catalogue.