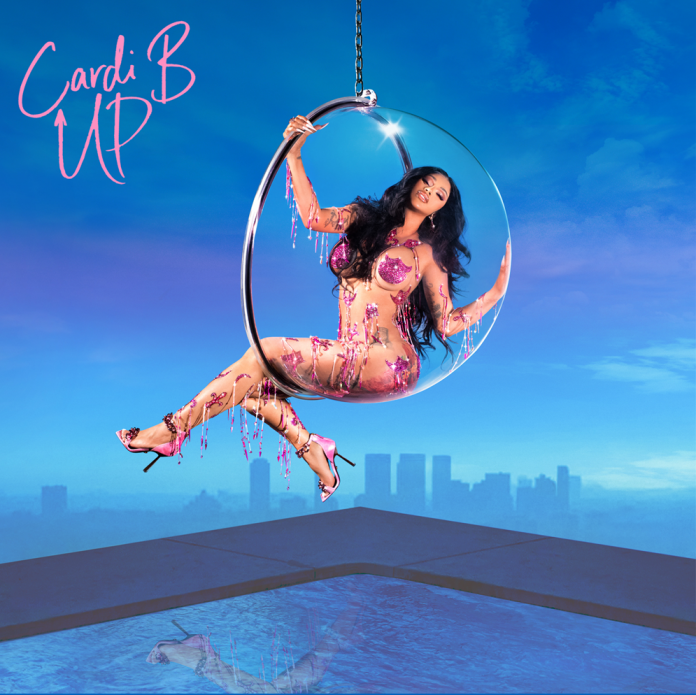 GRAMMY Award-winning, multi-platinum selling, Atlantic recording artist Cardi B has announced today’s release of her eagerly awaited new single. “Up,” produced by DJ SwanQo & Young Dza, is available now at all DSPs and streaming services HERE following its exclusive iHeartRadio premiere earlier today; an official companion video – directed by Tanu Munio – is streaming now.
Along with the new track, Cardi B’s new limited series, ‘Cardi Tries____’, is available on Messenger’s Watch Together. In the 8-episode series, she takes on outrageous new challenges and tries her hand at becoming a ballerina, teacher, sushi chef, and more.

Cardi has also partnered with Reebok for a new collection. The Reebok x Cardi B product allows everyone to showcase their bold personal style and stay unapologetically true to themselves – just like Cardi. The latest Reebok and Cardi B drop includes new neon colorways of the Club C Cardi and the Cardi Coated Club C Double coming in Hi Vis Green, Dynamic Pink and White. The product is available to buy beginning February 5 on Reebok.com, Foot Locker, Finish Line and Footaction.

Recently named Billboard’s “Woman Of The Year 2020,” Cardi B made history with the explosive success of last summer’s blockbuster single, “WAP (Feat. Megan Thee Stallion),” available now at all DSPs and streaming services HERE. Currently certified 3x platinum by the RIAA, “WAP” debuted at #1 on the Billboard “Hot 100” upon its August release – Cardi’s fourth #1 single in the US, extending her record as the female rapper with the most #1 singles in “Hot 100” history and affirming her as the only female rapper to have reach #1 on the “Hot 100” in two different decades. The track – which went on to spend four weeks atop the “Hot 100” while also spending multiple weeks at #1 in Australia, Canada, Greece, Ireland, Lithuania, New Zealand, and the United Kingdom – made further history as the first #1 single on the inaugural Billboard “Global 200,” topping that chart for three weeks.

Hailed by the Los Angeles Times as “a savage, nasty, sex-positive triumph.,” “WAP (Feat. Megan Thee Stallion)” was a worldwide critical favorite, ultimately named as the “Best Song of 2020” by such top outlets as the BBC, Genius, NME, Pitchfork, Rolling Stone, and Uproxx. In addition, “WAP” has been honored with a range of awards and nominations, including the American Music Award for “Favorite Song – Rap/Hip-Hop)” and the People’s Choice Award for “Favorite Collaboration of 2020,” to name but a few.

Cardi B’s rambunctious spirit and brave tongue garnered instant online popularity, rapidly increasing her fan base. She has evolved into an entertainer, actress and a renowned rapper in just a short time. Cardi rose to rap success and fame, releasing her debut studio album INVASION OF PRIVACY in 2018. Cardi continues to be at the top of her game as the first woman with five simultaneous Top 10 hits on Hot R&B/Hip-Hop Songs Chart as well as the first female rapper with four Billboard Hot 100 #1s. Now a GRAMMY AWARD WINNING rap superstar, Cardi’s 3x Platinum selling debut album INVASION OF PRIVACY debuted at #1 on the Billboard 200 chart. The album includes the 9x RIAA platinum certified classic “Bodak Yellow,” and all 13 tracks on Invasion of Privacy have been RIAA certified Gold or higher – making Cardi the first female artist to achieve this feat. Cardi’s single “Money” is now RIAA 4x Platinum certified, and her recent single “Press” is now RIAA certified Platinum.