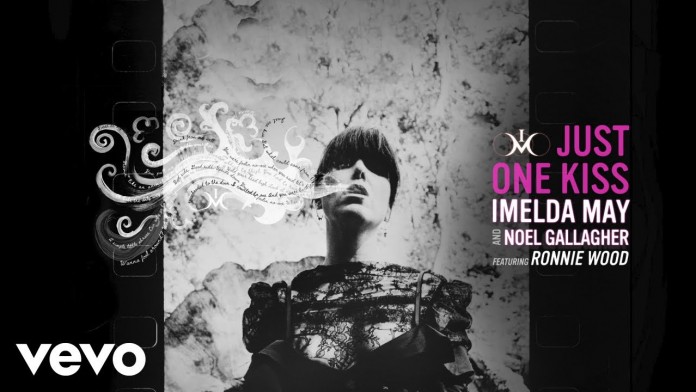 Imelda delves into desire, both romantic and carnal with “Just One Kiss,” It is a deliciously lustful low-slung blues number which showcases Imelda’s prowess as a wordsmith and storyteller, and of course – that mesmerizing voice. “That moment you know it can go either way. The sharp notion if you succumb you might just lose control. The split second decision you know might change everything, with just one kiss. Could you resist?”

After an idle texting exchange with her friend Noel Gallagher, he happily joined in to duet with Imelda and brought his “great vibe and kick-ass voice” to the steamy rock tale.

On guitar Wood, also a long-term pal (they met when they shared a stage in a Dublin blues basement when she was only 16) brings an alley-cat energy to the rollicking tune. Imelda says, “He’s just joyous to be around. It’s infectious. He’s fast, really on-the-ball, and he knows intuitively when something is working.”

Her sixth studio album 11 Past The Hour is a record that brims with sensuality, emotional intelligence, spirituality and intuition, marking a new chapter for Imelda and showcasing her at her most authentic. With pals and collaborators like Wood, Gallagher and Miles Kane, and with inspired contributions from feminist thinkers and activists such as Gina Martin and Dr Shola Mos-Shogbamimu, the album is an invigorating blast of rock’n’roll, with a purpose.

Mostly written with co-producer Tim Bran (London Grammar, Primal Scream) and string arranger Davide Rossi (Coldplay, U2, Goldfrapp), this brave album shows an artist diving deep into her true self, her Irish roots, her love of storytelling and singing from her soul: “11 Past the Hour is my truth. I always write with meaning and from my heart as that’s the reason I write, to connect with my own story at each particular moment and I hope therefore I connect with others during theirs, even if just for a while. I’d like to think I can put into words and music what we all feel sometimes. We all laugh, sing, love, cry, dance, kiss, care. We all experience lust, anger, joy, worry, sorrow and hope. Sometimes we stay silent and hold it all in and sometimes we dance and throw it all to the wind with abandon but one thing is for sure is we are in this life together. Each song is a moment in my life. Each life is a moment in time. Every minute counts.”

The title track (written with Pedro Vito) opens the album with characteristic poetic vividness recalling the romance noir of a lost David Lynch soundtrack, while “Made To Love” is an anthem celebrating acceptance/LGBTQ+ communities and the startling piano ballad “Diamonds” (co-written with Ivor Novello winner Sacha Skarbeck) is a stirring stand out about digging deep to appreciate the true simplicity of love. Then, switching things up again, is the galloping Eighties pop-goth synth romp of “What We Did In The Dark,” a duet with Miles Kane. Just a few of the variety of views, multiplicity of voices, range of emotions and exciting, adventurous spread of sounds on 11 Past The Hour. But holding it all together is the big-hearted, big-thinking woman at the centre of it.

Born and raised in The Liberties area of Dublin, Imelda has become one of Ireland’s most famed female artists in history. Discovered by Jools Holland, who asked Imelda to go on tour with him, Imelda has gone on to perform duets with artists including U2, Lou Reed, Sinead O Connor, Robert Plant, Van Morrison, Jack Savoretti and Elvis Costello and has featured on recent albums & live tours with Jeff Beck, Jeff Goldblum and Ronnie Wood.

Her last album landed at No.5 in the UK Official Album Chart and she can count such artists as Bob Dylan and Bono amongst her fans. Last year, her 2008 album Love Tattoo was named the bestselling album of modern chart history by a homegrown female Irish artist by the Official Charts Company. Last summer, Imelda released her debut poetry EP Slip of the Tongue to widespread critical acclaim and received global recognition for her poem “You Don’t Get To Be Racist and Irish” used by the Irish government’s ReThink Ireland campaign for billboards across the country.

As ever, Imelda manages to cut through the noise, bringing her rich, sensual voice and exuberant personality to everyone and everything around her. 11 Past The Hour is an album of grit and glamour, of wee hours vocal huskiness and anthemic pop belters. Of poetry and power. Of love and sex and fun – this is Imelda May. This is her time.