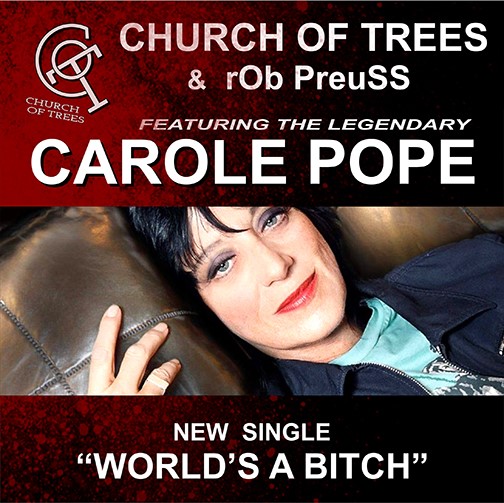 The song and video relay a stirring sonic snapshot of the angst felt and coping mechanisms tapped when it comes to the COVID-19 pandemic, and the world’s desperate need for vaccine distribution.

Also featured on the track, the pairing of Pope with Church of Trees came by way of former Spoons/Honeymoon Suite keyboardist Rob Preuss; while working directly but separately with each artist, he had a lightbulb moment, and suggested Frazer write something that might suit Pope’s voice.

“They say to never meet your heroes because they’ll disappoint, but Carole was in such fine form,” Church of Trees’ lead Frazer shares, brimming with excitement on his experience with the rock icon. “She was delightful!

“I’ve been a fan of Rough Trade since the 70s, and Carole’s voice and lyrics have always resonated with me,” he continues. “To write for such a legend was a dream come true; I leapt at the chance, and couldn’t believe she liked it!”

With her hit “High School Confidential” recently inducted into the Canadian Songwriters Hall of Fame, Carole Pope is the award-winning vocalist of Rough Trade, and also known for leveraging her iconic status to openly table discussion around LGBTQ+ sexuality in her lyrics, starting in the ‘70s. “World’s a Bitch” is one of several musical projects Pope is currently working on; most especially, she is dedicated to Attitude: The Musical — a stage production based on the life of her late brother Howard, a New York-based musician who passed away of AIDS in 1996.

Emotionally-driven in many corners of her inspiration, Pope thinks “the song encapsulates how we’re all feeling about being locked down…

As it would turn out, Preuss ultimately connected the dots for the “World’s a Bitch” video as well; producer and director Morgan Elliot of Suddenly SeeMore Productions is a school chum of his and reached out after hearing the song. “She suggested she could put together a music video to capture the feeling of the track,” Frazer explains, “so Rob put her in touch with me.

“We chatted about a DIY video I had previously done for our song, ‘End of Days,’” he continues. “I had sourced a lot of news footage about Covid for it — images of hospitals overflowing, empty streets, rising numbers, and such. Morgan suggested we use similar footage coupled with imagery of Carole on the streets, singing.

“At first, Morgan and the director of photography, Ivan VerLaan, ultimately decided they’d have better results if Carole was in the studio, and it was then Carole’s idea to source footage from fans showing their own related burnout scenes. Morgan really championed the idea and, between Carole’s and Church of Trees’ fans, we had several hundred entries within a week.

“It was so great of these folks to let us inside their lives like this, and show us how they are dealing with their own personal struggles around Covid.

“This, and they were so incredibly creative!”

Underscoring the universal fact of an outsized populous responding to — and living through — a global pandemic, footage poured in from all corners of the globe, including the UK, Sweden, Germany, Greece, and Japan — not to mention all across North America.

And it wasn’t just friendly fan faces filling the screen; Church of Trees members Frazer, Hope and Stanton — as well as Preuss and Zadorozny — are also featured. “Everyone really embraced the concept and sent back stellar footage,” Frazer says. “It was clear the video was about ‘being under lockdown’ and how each of us were handling it, so there was no need for generic footage anymore. The fans were telling the story — their story — and that made so much more sense.

“Morgan worked with Frank Cassano to assemble the final cut, and his edits not only tell the story of Covid burnout, but with humour. It was wonderful to see just how much heart everyone put into the project: the band, the team, the fans, and especially Carole… She’s a superstar.

Church of Trees are an Ottawa-based synth pop project that first splashed onto the scene with their breakthrough EP, Primitive Creatures, in 2017; the offering quickly resonated with new fans worldwide, landing them on a host of ‘Top Album’ roundups and chart-topping spots along the way.

Their sophomore release, The Dark & The Light (2018) made way for an edgier sound, while 2020’s follow-up, New Bold Dawn, continued to build grit and attitude into their now-signature sound.