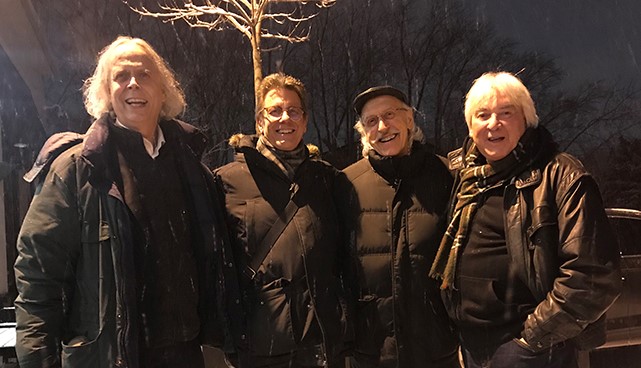 A hallmark in Canadian rock history since its 1980 release, The Kings’ debut album, The Kings Are Here — and breakthrough single “This Beat Goes On/Switchin’ To Glide” — have finally been crowned certified Platinum and Gold for record sales by Warner Music Canada and Music Canada. To celebrate, the Ontario-based rockers have unleashed a new video for “I Know So” — available now.

Standard radio play over the last four decades has had “This Beat Goes On/Switchin’ To Glide” soaking up the airwaves across North America; it entered the Billboard Hot 100 during the month of its release and stayed for 23 weeks receiving massive airplay in all major markets. The feelgood hit was also recently inducted into The Canadian Songwriters Hall of Fame, cementing the band in Canadian rock history. Still touring and performing to this day, The Kings have maintained a devoted fan base of loyal subjects, as well as garnering new followers throughout the world with over 4.3 million views on YouTube for the single alone.

Just released, the new music video for “I Know So” is a mashup featuring a collage of wild dancing and big band clips spliced from classic films interspersed with footage of The Kings past live performances. According to the band, the direction of the video was inspired by “some dancers really going crazy to this song one night in a club.”

“In a time when the world is dealing with COVID-19, we thought something light and fun might be in order,” the band says of the new release. “So, we hope you enjoy this video and share it everywhere. We love you!”

Most of the original lineup of The Kings is maintained with David Diamond on lead vocals and bass, Mister Zero on guitar, and Sonny Keyes on keyboards — with the inclusion of Earl Seymour on the saxophone.

The newly certified Platinum-selling release “The Kings Are Here” debuted in 1980, and was produced by music industry titan and producer Bob Ezrin, at Toronto’s Nimbus 9 Studios — a legendary facility in Canada’s rich music history. Ezrin, who has worked with the likes of Pink Floyd, Alice Cooper, and KISS, among others, was so impressed with the band’s sound, he had them signed to a worldwide deal with Elektra Records in Los Angeles while Warner Music Canada did an amazing job at home leading to this Platinum status.

The strength of their debut offering and pulsating sound led The Kings to share the stage with music industry heavyweights Bob Seger, Jeff Beck, The Beach Boys, Eric Clapton and more. Their rapid growth in popularity at the time culminated in the band playing on Dick Clark’s American Bandstand, as well as earning them a closing spot on the Heatwave Festival, a one-time Canadian take on the historic Woodstock festival; Heatwave was held on August 23rd, 1980, and the festival boasted an astounding bill featuring Elvis Costello, Talking Heads, The Pretenders, The B-52’s, Teenage Head and more.

Almost 20 years since its original release, The Kings Are Here was re-released on CD by Warner Music Canada in 1999, and featured five additional tracks from the band’s catalogue. It launched the band into the CD generation, giving The Kings and their debut more longevity and exposure. In 2017, the band released their documentary movie, The Kings: Anatomy of a One-Hit Wonder, on YouTube, telling in their own words the story of their rise from the clubs to a major US record deal — including the hilarious story of their disastrous first US gig in Denver.

Over the years, The Kings have released several albums: The Kings Are Here (1980), Amazon Beach (1981), R.S.V.P. (1982), Unstoppable (1991) and Because Of You (2003), along with a deep cuts compilation called Anthology 1. Also available is their historic live trilogy consisting of the CD, The Lost Tapes of a Seventies Bar Band, the movie, The Kings: Live at Heatwave, and the DVD, No Covers — all of which chronicle the strength of the band live on stage.

The Kings have over 70 titles available on Spotify, and are currently in the studio working on their next full length album to be released later this year.