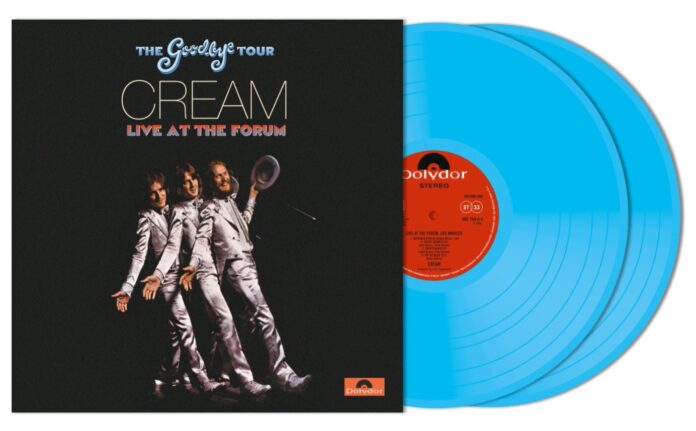 The limited edition, blue, 2LP release of Cream’s show Live at the Forum, recorded at the Los Angeles Forum during their Goodbye Tour of 1968, will be released for the first time on April 23. Taken from the 2020 full version of the 4-CD set of the Goodbye Tour 1968 and produced by Bill Levenson, this sumptuous 2LP set is the first authorized release of the full concert on vinyl. It captures Cream at their virtuosic best, at the end but also at the height of their career.

With Cream, Ginger Baker, Jack Bruce and Eric Clapton, set the template for not only the ‘supergroup’ but also the “power trio,” with their innate musical talent and brilliance. Only coming together as Cream in July 1966, they shone briefly but blindingly bright throughout two trailblazing years.

“Cream was a shambling circus of diverse personalities who happened to find that catalyst together….. any one of us could have played unaccompanied for a good length of time. So you put the three of us together in front of an audience willing to dig it limitlessly, we could have gone on forever…. And we did….just going for the moon every time we played,” said Eric Clapton.