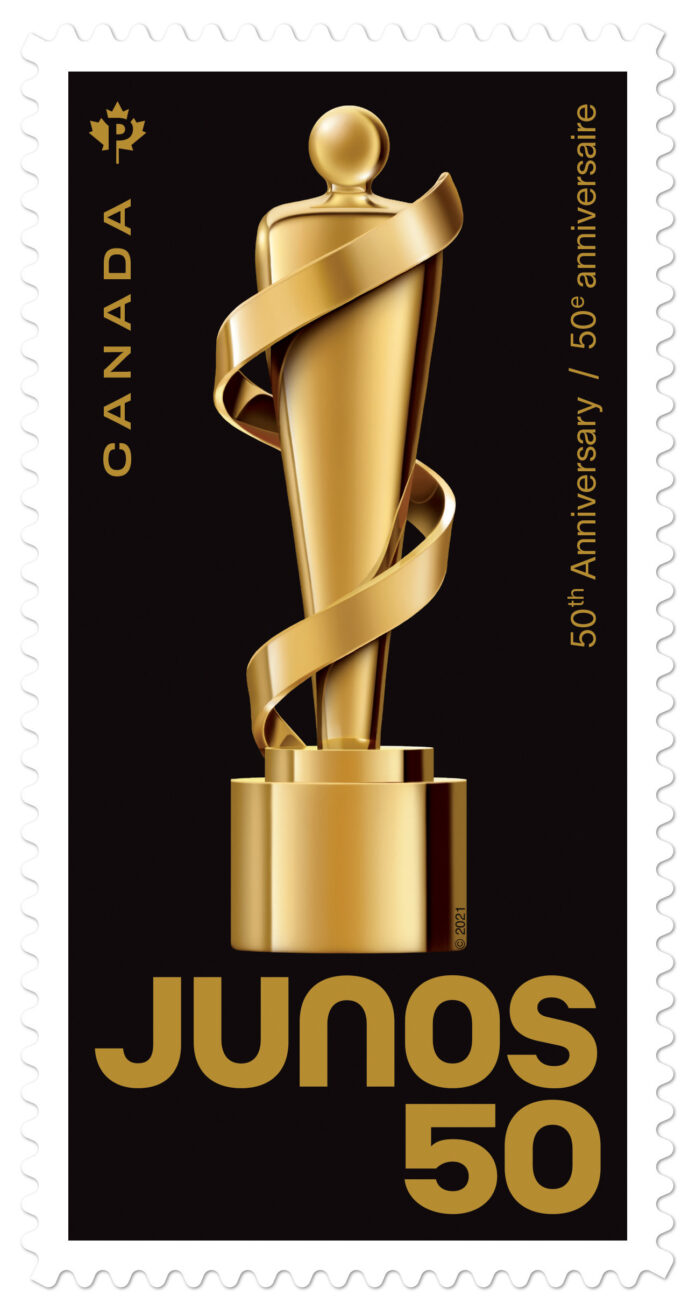 The JUNO Awards turn 50 this year, and Canada Post is celebrating this golden anniversary with a new commemorative stamp.

The stamp pays tribute to the country’s premier music event, and its role in supporting and showcasing Canadian artists and creators over five decades. Since 1971, the JUNOS have recognized Canada’s immense range of talent, from rising stars to household names, including 25-time JUNO winner Anne Murray – the recipient of the most JUNO Awards to date – Buffy Sainte-Marie, Céline Dion, The Tragically Hip, The Weeknd and so many more.

To mark the importance of the 50th anniversary, the JUNOS have redesigned the prestigious award from the solid crystal tower into a new golden statuette, which is featured on the commemorative stamp.

What has become Canada’s biggest night in music started as a simple annual poll of the country’s favourite musicians in a former trade publication, RPM, founded by publisher Walt Grealis and record producer Stan Klees. Initially known as the RPM Gold Leaf Awards, they were renamed in 1971 to honour Pierre Juneau, first chair of the Canadian Radio-television and Telecommunications Commission (CRTC) who was also responsible for the implementation of Canadian content regulations in the early 1970s.

Since their beginnings, the JUNOS have evolved alongside Canada’s vibrant music scene, and they have added new categories to recognize the increasing diversity of the country’s most celebrated artists.

“We are thrilled to partner with Canada Post to celebrate the 50th Annual JUNO Awards,” says Allan Reid, President and CEO, CARAS/The JUNO Awards and MusiCounts. “Collaborating with this historical institution allows us to celebrate Canada and our nation’s renowned musical talent. Our new golden statuette will stand proud on the limited-edition stamp and we can’t wait for music lovers across the country to get their hands on one.”

The special 50th anniversary presentation of the JUNO Awards will be broadcast nationwide Sunday, May 16 at 8 pm, ET/5 pm, PT, on CBC TV, CBC Gem, CBC Radio One, CBC Music and globally on CBCMusic.ca/junos.

Designed by Paprika and illustrated by Amanda Arlotta, the stamp features the new golden statuette that JUNO Award winners will begin receiving this year.

Stamps and collectibles are available at canadapost.ca/shop and postal outlets across Canada.