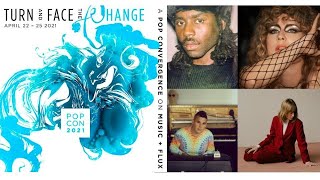 NPR Music is proud to present the keynote panel conversation for the 2021 Pop Conference, hosted by New York University’s Clive Davis Institute of Recorded Music. The keynote is titled “Fluxed: Making Popular Music in the Midst of Change and Transition.”

To kick off a four-day special “Convergence” version of the annual Pop Conference, the keynote conversation invites a panel of four artists thriving within the highly volatile environment of contemporary popular music to discuss how the spirit and realities of change both challenge and inspire them. From taking on the themes of transformation and precariousness in their own music, to fully exploring what new technologies can communicate, to coping with a radically altered social and economic landscape, musicians must act at the forefront of new 21st-century modes of being. This open-ended conversation connects the transforming craft and business of music-making to the art of capturing musical meanings in a highly turbulent world.

The panel’s participants are leaders in reimagining what music and its cultures can be: singer-songwriter-auteur Devonté Hynes, whose work under many different names (Blood Orange, Lightspeed Champion) exemplifies the refusal to adhere to outdated categories; producer and musician Rostam, who has been instrumental in defining the anti-genre sound of 21st century pop; singer, songwriter and producer Roísín Murphy, whose dance-inspired music finds the point where past meets future, and Tamara Lindeman, who records as the Weather Station and models how the singer-songwriter role is changing in response to both exploding musical categories and a world in crisis. Ann Powers, NPR Music Critic and author of many books, most recently Good Booty: Love and Sex, Black and White, Body and Soul, moderates. The event is produced by Jason King.