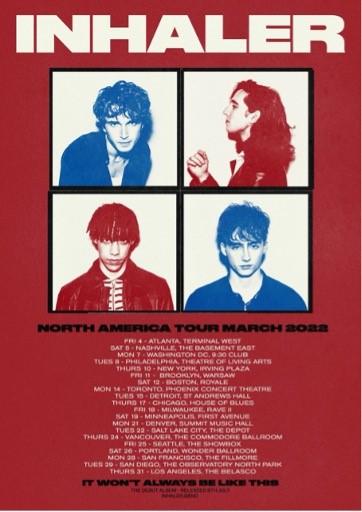 Inhaler announce their North American tour kicking off March 4, 2022 in Atlanta at Terminal West and wrapping up March 31, 2022 in Los Angeles at The Belasco Theatre (see below for complete itinerary). Tickets are available to the general public on May 21 at 10am local time. The Dublin quartet’s first full-length, It Won’t Always Be Like This, will be released on July 9th on Interscope Records and is available to pre-order here. It’s a record that sees Elijah Hewson (vocals and guitar), Josh Jenkinson (guitar), Robert Keating (bass) and Ryan McMahon (drums) turn their early promise into something special, an album teeming with expansive indie-rock grooves and soaring anthems. “We really had the opportunity to explore our sound,” says Hewson.

“We’re extremely happy to announce our next American venture,” says Inhaler. “Hard to believe we’ve gone this long without each other. Can’t wait to play you new music. “

The album includes the single “Cheer Up Baby,” a swooping, epic singalong alongside early fan favorites “My Honest Face” and title track “It Won’t Always Be Like This.” Inhaler made their U.S. television debut on The Late Late Show with James Corden in March where they performed “Cheer Up Baby.” Inhaler have amassed a diehard fanbase despite only releasing a handful of singles which have been streamed over 52 million times.

Inhaler will play a full tour of the UK and Ireland later this year before heading to the states for their March 2022 North American headline tour. The dates in September, October and December include brand new UK tour dates alongside the band’s rescheduled tour of Ireland.

See below for a complete list of Inhaler’s 2022 North American tour dates:

Inhaler formed while still at school in Dublin, bonding over a love of Joy Division, The Stone Roses, Kings Of Leon, The Strokes, Interpol, The Cure and more. A string of captivating singles and their fevered live show have earned them a diehard fanbase. The band were originally meant to begin recording It Won’t Always Be Like This in March 2020 but their plans were derailed by lockdown. Instead of moping, they used the period as a time to rethink and reimagine what their debut album could be.