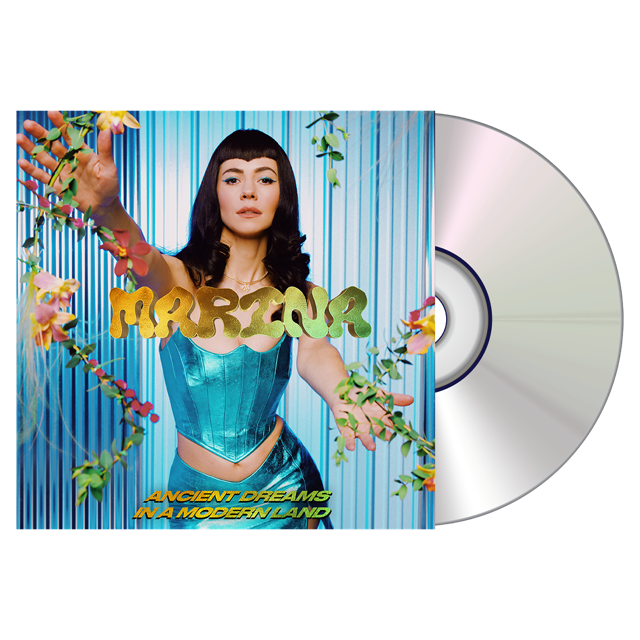 MARINA is celebrating today’s release of “Ancient Dreams In A Modern Land,” available now via DSPs and streaming services HERE. “You don’t have to fit into the norm, you are not here to conform” she sings on the track that ponders all we can be as beings on Earth. A vibrant VHS-inspired visualizer accompanying the song is streaming now via YouTube. The new song comes as the title track from MARINA’s upcoming album, Ancient Dreams In A Modern Land; due out June 11th, with pre-orders available now.

Along with the new song, MARINA has announced a major global livestream concert event, MARINA presents Ancient Dreams Live from the Desert, with the premium digital live platform Moment House. Spend an evening with Marina and her band in the remote California desert, where nature and music will collide and come to life. Playing the new album exclusively for the first time along with some fan favorites, let MARINA take you away to her unique Land for a night of desert dreaming.  A unique Deconstructed Dreams afterparty featuring an album breakdown by MARINA and a fan q&a will accompany the stream, along with limited meet & greets and exclusive merch.  The Ancient Dreams Live from the Desert moment will take place on June 12/13th (depending on territory) on Moment House and will be broadcasted to various regions around the world including North and South America, Asia, Australia & New Zealand, and the UK, Europe and Africa. Please see below for livestream dates and times by territory, and visit Moment House’s website for further information. Tickets are on sale now via momenthouse.com/marina.

“Ancient Dreams In A Modern Land” follows the release of fellow album track “Purge The Poison,” available at all DSPs and streaming services alongside its official music video, directed by Weird Life Films. An accompanying Pussy Riot remix that further amplifies the song’s environmental message is also streaming now HERE.

Written solely by MARINA in reaction to the startling statistics that only two percent of producers and three percent of engineers across popular music are women, “Man’s World” was produced by Decilveo and co-produced by MARINA, and engineered by the first-ever female GRAMMY® Award winner for “Best Engineered Album, Non-Classical,” Emily Lazar (Sia, Clairo, Haim). The song and accompanying video were met by high praise from a wide range of international media outlets, with Billboard declaring it among “MARINA’s most important work to date.” “Man’s World” is “a laser sharp takedown of the patriarchy,” raved Refinery29, while BlackBook applauded the track as “just the sort of inspiration we need right now.”