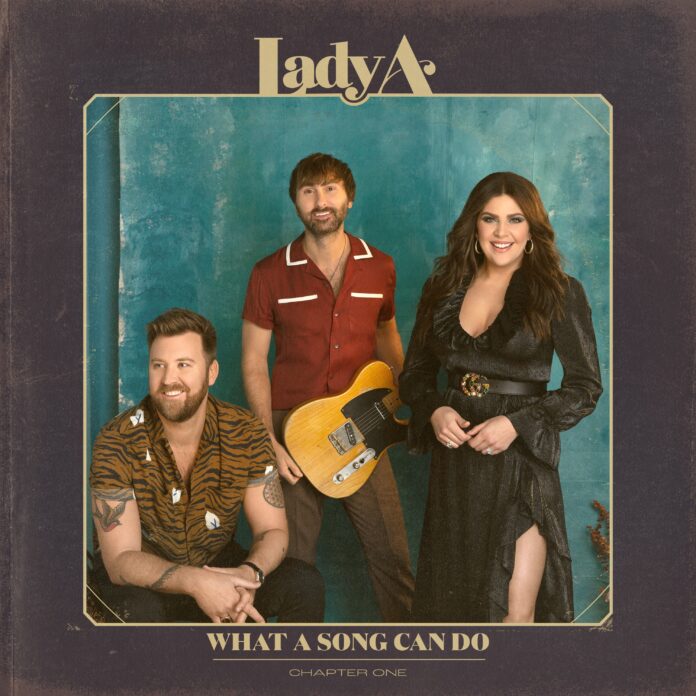 With a renewed sense of inner strength and hope, the multi-Platinum band Lady A announce details today behind their upcoming WHAT A SONG CAN DO (CHAPTER ONE) (BMLG Records) collection, set to be released June 25. After spending last year in rediscovery mode while recommitting themselves to their original intention, the trio emerged with a new, refined vision.  The seven-track ensemble, produced by Dann Huff and with each track penned by at least one member, reinvigorates their signature rich vocal harmony, vivid emotional writing and a smooth fusion of Country, rock and pop. The new music is not dedicated to the struggles of 2020, but it was born alongside them and adds a layer of uplifting depth to Lady A’s catalog. WHAT A SONG CAN DO (CHAPTER ONE) will be available for pre-order this Friday (6/11) here alongside its gentle and wise new track “Things He Handed Down.”

“There’s an interdependence that we have with each other, and music is at the center of that to me,” Hillary Scott said. “We are all living in the now together…we’re all a work in progress, and that is what we wanted to share with these songs on the first chapter.”

With a renewed appreciation for their music and the friendship that made it possible, Lady A offers an honest self-examination while striving to be present and preaching empowered affirmation, all with the sonic blend they’re best known for. Together, they explore musically through a pure-Country lens of love, loss and laughter. The quintessential Lady A title-track for WHAT A SONG CAN DO (CHAPTER ONE) opens the trio’s hearts to a fresh start, while songs like “Talk of This Town” and “Fire” use third degree romantic burns as a metaphor for adversity. “Worship What I Hate” takes a brutally-honest look at who we become if we’re not paying attention and “Chance of Rain” reminds us not to play it safe in matters of life and love. The gentle “Things He Handed Down” dusts off some heirloom wisdom, questioning how it’s put to use.

WHAT A SONG CAN DO (CHAPTER ONE) TRACK LIST

Built around rich vocal harmony, vivid emotional writing and a smooth fusion of Country, rock and pop, Lady A have long been a model of mainstream success. Their 11 No. 1s, 18 million albums sold, 34 million tracks, five billion digital streams and a global touring footprint prove the point. Known for their 9X PLATINUM hit “Need You Now,” which is the highest certified song by a Country group, they have earned CMA Awards Vocal Group of the Year trophies three years in a row and countless other honors including five GRAMMY Awards, Billboard Music Awards, People’s Choice Awards, Teen Choice Awards, a Tony Award nod and were recently inducted as members of the Grand Ole Opry. The 34-city LADY A: WHAT A SONG CAN DO TOUR will launch July 29th in Uncasville, CT with special guests Carly Pearce, Niko Moon and Tenille Arts, with a portion of the ticket sales going towards LadyAID, the group’s philanthropic fund. For more information visit www.ladyamusic.com.