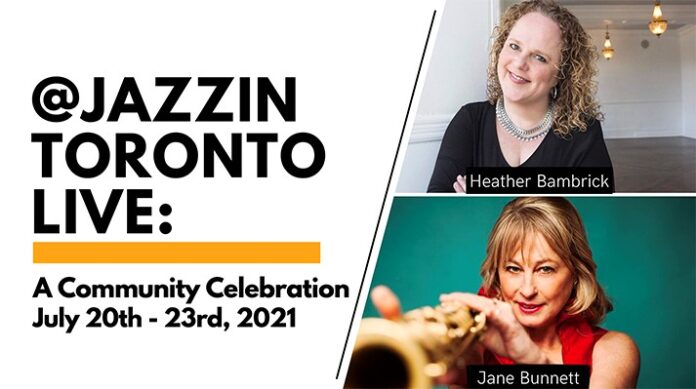 Check out their GoFundMe page here, too.

JazzinToronto Live: A Community Celebration is a free festival set to live-stream from some of the city’s most beloved venues. The four-day digital event will present an exciting roster teeming with the diverse talent the City of Toronto has to offer — including Laura Hubert, Rebecca Hennessy, Alexis Baro, Nathan Hiltz, Donovan Locke, Jesse Ryan and Caity Gyorgy.

“JazzinToronto started in 2018 as a daily listings service on Instagram,” Founder and Co-Director Lina Welch shares. “Our mission is to connect Toronto jazz audiences, musicians, venues, and presenters — which has only become even more important during this challenging time.”

“When I joined JazzInToronto in January 2020, we had no idea what was in store for Toronto, the local jazz community, and the world-at-large with both the pandemic, and its ripple effect on live music,” Co-Director Ori Dagan adds. “Toronto and its music scene are hard-as-nails and determined to thrive, though, so when COVID hit, we became a presenter of weekly live-streamed performances with musicians from their living rooms.

“JazzinToronto: A Community Celebration is our first festival, and arrives at a time when there’s so much hope on the horizon for our city, and beyond!”

“What started as a mission to get local audiences out to enjoy all the great Jazz Toronto has to offer has turned into a new and expanded opportunity to spotlight our city’s incredible talent with a growing local, national, and international audience,” Welch says. “For an organization that started on a social media platform, it’s fitting that our first festival can be enjoyed in a similar way with audiences both from Toronto, and around the world.”

Endeavouring to remain accessible, the festival will be free to audiences tuning in via JazzinToronto’s Facebook page, facebook.com/jazzintoronto. The audience will be invited to make donations which will be split between the artists and participating venues.

Venue partners include the Rex Hotel, Jazz Bistro, Lula Lounge, Top O’ the Senator, Tranzac, DROM Taberna, The Emmet Ray, and Motel Bar as hosts for the initial broadcasts; the event will culminate in a double bill at Koerner Hall with multi-award winning headliners Jane Bunnett and Heather Bambrick.