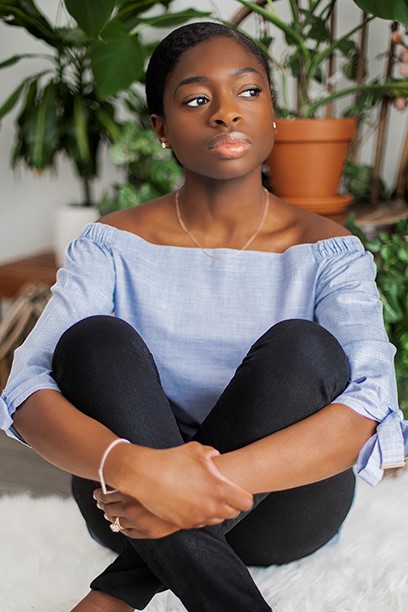 Fresh off the sweet success of her first time win for Vocal Jazz Album of the Year at the 2021 JUNO Awards, St. Catharines, ON Jazz-Pop R&B singer-songwriter Sammy Jackson arrives with her rapturous new single, “What Is There To Say?” — available now.

Further exemplifying her distinct sound that smoothly melds elements of jazz, R&B and pop, “What Is There To Say?” showcases the celebrated Jamaican-Canadian vocalist and songwriter in top form; it’s the perfect happy-sad song with Jackson delivering an achingly beautiful lament of pain and uncertainty juxtaposed with an instrumental melody that evokes warmth and contentment.

“‘What Is There To Say’ is about a relationship ending and not knowing what the future holds,” Jackson notes. “The lyrics illustrate a feeling of sadness and regret while the harmonic progression conveys a feeling of hope and a new beginning.”

On June 5th, 2021, Sammy Jackson took home the JUNO Award for Vocal Jazz Album of the Year for her sophomore EP, With You. She won the honour over a field of superbly talented, established peers including Diana Krall, Laila Biali, Matt Dusk, and Sophie Day. “I am truly humbled and honoured to receive this award,” Jackson says of her reaction. “Thank you to everyone involved in this project, and everyone who has believed in me throughout this journey. I would not be here without you.”

Following up her debut release, 2016’s Take Me Back, the JUNO winning With You features all-original compositions in collaboration with vocalist and songwriter Jacqueline Teh, as well as Tom Fleming (guitar), Chris Pruden (piano), Mark Godfrey (bass), and Ian Wright (drums). The project was funded by FACTOR and the Ontario Arts Council.

In addition to gathering performing experience, Jackson pursued a formal education in music, earning a Bachelor of Music in Performance degree from the University of Toronto, studying with accomplished vocalists including Alex Samaras, Christine Duncan and Sienna Dahlen.

With her first JUNO Award on her mantle and certainly many more accolades to be won, there will be plenty to say about Sammy Jackson’s artistry in the years to come.

“What Is There To Say?” and With You are both available now.