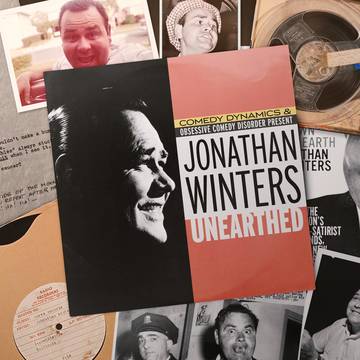 This first posthumous release since his passing in 2013 is entirely built from Winters’ personal stash of tapes and acetates and is focused on a specific, narrow window of time from 1958 to 1960. It includes Winters’ first two classic albums as they’ve never been heard before as well as a third LP of unreleased demo recordings and other rare material. The contents of the audio collection are contextualized by an essay from Dan Pasternack which draws heavily upon Winters’ personal writings. The package is further enhanced by many photos, clippings and other personal ephemera from Winters’ private scrapbooks and liner notes especially composed for the package from Billy Crystal, Jimmy Kimmel, Carol Burnett, and Patton Oswalt.

Amongst the material included from the iconic, Grammy Award winning artist are his first LP for Verve,The Wonderful World of Jonathan Winters and his full uncut performance at the famed Hollywood nightclub the Crescendo in 1960, which was edited to become his second Verve LP, Down To Earth, both from Winters’ own master tapes. In addition, the collection features Winters’ 1958 novelty record for Coral Records Nee Nee Na Na Na Na Nu Nu; five recently discovered demo tracks Winters recorded for Verve and two never before released “audition” episodes of a proposed comedy radio series entitled Winters Wonderland. This will be an exceptional collectible for Jonathan Winters fans worldwide and is the only comedy Record Store Day release of the year.

Jonathan Winters was a comedian, TV show host, actor, author and acclaimed painter who recorded many classic comedy albums for Verve Records. He was nominated for 11 Grammy Awards, eight of which were for Best Comedy Album. Winters was the second recipient of the prestigious Mark Twain Prize for American Humor in 1999. During his illustrious career that spanned over six decades, Jonathan appeared in films such as It’s a Mad, Mad, Mad, Mad World, The Loved One and The Russians Are Coming, The Russians Are Coming and on hundreds of TV shows including The Tonight Show (first with Steve Allen, then with Jack Paar and later with Johnny Carson), The Twilight Zone, Mork & Mindy and Davis Rules, for which he won an Emmy Award. He also voiced Papa Smurf in The Smurfs feature films in 2011 and 2013. (The latter Smurfs movie was dedicated to his memory as it was released shortly after his death.)

“I am overjoyed that my dad’s work will be discovered and re-discovered through this collection. And that it is being presented in a way to also tell his story. While aspects of his life were difficult, I am so proud that he was able to overcome adversity, leaving behind such a rich legacy of laughter,” said Lucinda Winters.

“It was one of the great privileges of my life to have Jonathan as my friend. And it is one of the great honors of my career to be able to take part in preserving the memory of his genius. I felt a tremendous responsibility in getting everything right. Both in relation to his comedy but also in sharing his brave battles during a time when there was much less public awareness or understanding about mental illness,” said Dan Pasternack.

“This box set will serve as a reminder of why Jonathan is one of the most revered comedy legends of all time. We’re honored to be partnering with Lucinda Winters and Dan Pasternack to celebrate Jonathan’s life’s work,” said Brian Volk-Weiss, Founder and CEO of Comedy Dynamics.