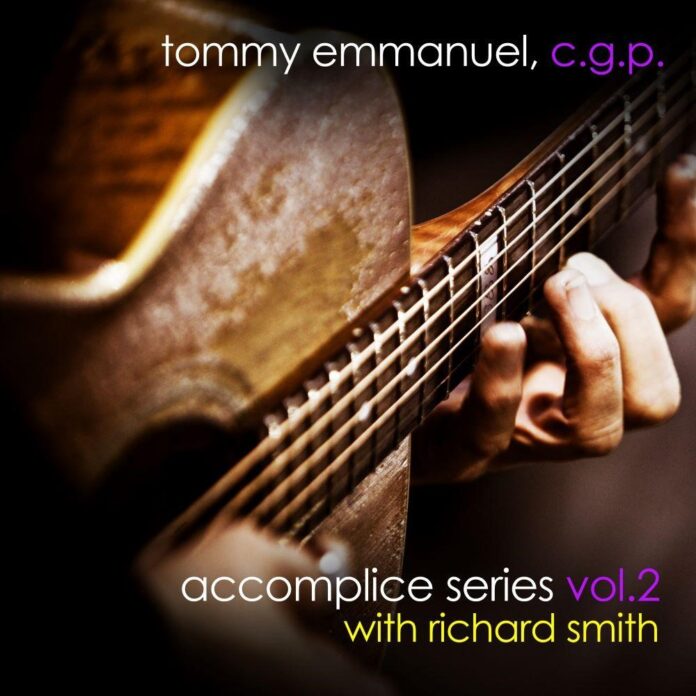 Acclaimed and Grammy-nominated acoustic guitarist, singer and songwriter TOMMY EMMANUEL — one of five people ever named a CPG (Certified Guitar Player) by his idol, music icon Chet Atkins — has announced he will release his new EP, ACCOMPLICE SERIES VOL. 2 with Richard Smith, on September 10. Smith is the revered British fingerpicking acoustic guitarist who has performed or recorded along the way with Chet Atkins, Les Paul and Tommy Emmanuel among others. The four-song EP, a tribute to their heroes Jerry Reed and Chet Atkins, also contains “Twitchy,” “Nashtownville” and “Baby’s Coming Home.”

The arrangement for “Serenade to Summertime” that Emmanuel and Smith play comes from the Jerry Reed & Chet Atkins album, Me & Chet. This song was recorded at TuneSmith Studio outside of Nashville, TN in the spring of 2021 and features both Tommy and Richard on guitar. The video was directed by Joshua Britt and Neilson Hubbard for Neighborhoods Apart. It was filmed in Lebanon, TN at an antique car collectors shop in the spring of 2021.

—There’s so much joyous guitar work on the EP. How did this collaboration with Richard come about and how did you guys first meet?

TOMMY: I heard about Richard through other players at the Chet Atkins events in Nashville, and when we first met up, we played until we were exhausted! I had found someone I could have the best time playing all the music I loved from my childhood and who had a similar attitude and energy!

—What are your thoughts about Richard’s playing and what do you feel you both artistically have achieved with this recording?

TOMMY: Richard and I both approached these recordings with a deep respect for our heroes. We added our own ideas but kept the authenticity of the original recordings present. We played these songs with much love and joy! Richard’s knowledge and abilities to channel Jerry Reed’s parts is what is most important to me, as I trusted him completely. When you stay close to Chet and Jerry’s parts, you can’t help but make great music, well written!

—The arrangement here for “Serenade to Summertime” comes from the Jerry Reed & Chet Atkins album, ‘Me & Chet.’ Perfect, because you both have a strong connection to Chet. Can you talk about why this song resonates with you?

TOMMY: “Serenade” is a typical melodic piece that Chet would have chosen to showcase his tenderness in a musical setting. Richard really stayed close to Jerry’s perfectly honed part as the accompanist and I tried to perform the song without too many frills or embellishments, just heart and feeling…

—“Twitchy” was written by Jerry Reed and performed by Chet Atkins and Reed. Why do you find this song inspirational?

TOMMY: “Twitchy” is such a great composition–you get the feeling it’s been around forever. It’s also one of the great duets that only Jerry could write to have Chet play the melody and he works all the harmony around it and plays a solo as well. We’ve played it for audiences a thousand times and hope we can play it another thousand times!

—”Nashtownville” was written by Chet Atkins and appears on the Jerry Reed & Chet Atkins album, ‘Me & Chet.’ What drew you to take this song on?

TOMMY: “Nashtownville” is a Chet composition and we both love its simplicity, yet, how strong it is, musically. Chet was a wonderful writer, and this song proves that. It’s two and a half minutes of pure MOJO!

—“Baby’s Coming Home” was written by Jerry Reed and Chet Atkins recorded it for his ‘Chet Atkins Picks on Jerry Reed’ album. What quality does this song have that attracted you to record it?

TOMMY: “Baby’s Coming Home” is a wonderful song that is perfect for harmonies and solo sections that give the player and the listener everything they’re looking for!

—It’s exciting news that the two of you will tour together this November in America (having done shows in the past). What are you most looking forward to about this tour?

TOMMY: Playing this music to new audiences everywhere is such a joy, as most people haven’t seen players recreate these songs in front of them. It’s entertaining, surprising, and uplifting! When you are in the entertainment business, like us, you have a big desire to take people out of their normal existence and surprise them into another realm–music like this is your magic wand!

—There’s so much joyous guitar work on the EP. How did this collaboration with Tommy come about and how did you guys first meet?

RICHARD: Tommy asked me a while ago if I would like to do this tribute to Chet Atkins and Jerry Reed as part of his “Accomplice” series. Of course, I had to do it! Like Tommy, I’ve been playing their music all my life. We both grew up on it. I first met Tommy back in 1996. He had played at a festival in France with the great Bay Area guitarist, Jim Nichols, who told him about me. I was living in England, where he had recently moved to, and he called up and came out to my family home. We jammed for hours that night.

—What are your thoughts about Tommy’s playing and what do you feel you both artistically have achieved with this recording?

RICHARD: Tommy has such an impeccable groove and such a personal touch and feel to his playing that has come about from listening to so many different musicians over the years. Chet Atkins and Jerry Reed were two very earliest influences for him. To pay tribute to these guys and play the tunes we grew up listening to, and put our own little stamp on them, felt like going full circle. This music is like mashed potatoes to both of us. It’s just so ingrained that playing it is like falling off a log. You bring yourself and other influences into it, which just kind of happens naturally.

—The arrangement here for “Serenade to Summertime” comes from the Jerry Reed & Chet Atkins album, ‘Me & Chet.’ Perfect, because you both have a strong connection to Chet. Can you talk about why this song resonates with you?

RICHARD: On the original recording, Chet used a Del Vecchio resonator guitar. That instrument has a particularly beautiful tone and sustain. Tommy captures that beautifully with his Maton acoustic. That recording was probably the first time I’d ever heard that guitar sound. Jerry Reed’s back-up part is a huge part of the sound of that song. The kind of rolling chords he used and the inversions he used were so beautifully constructed. Listening to it just takes me back to my childhood and when I first heard it.

—“Twitchy” was written by Jerry Reed and performed by Chet Atkins and Reed. Why do you find this song inspirational?

RICHARD: I think that tune is probably my favorite thumb-picking tune. It has such a great groove and such a simple melody. To me, it’s one of those tunes that just sounds like it grew there, like no one wrote it, and like it has just always existed. Those are the great songs to me. Songs and tunes that have melodies and chord structures that sound so obvious that you think “Of course! Why didn’t I think of that?” Another tune we both grew up on. It is also a pure duet. No band.

—”Nashtownville” was written by Chet Atkins and appears on the Jerry Reed & Chet Atkins album, ‘Me & Chet.’ What drew you to take this song on?

RICHARD: It was just another great song from that album that was addictive listening. As a student of the guitar and the music, you want to learn everything. It’s another one of those songs that any guitar player who had that album would have had a go at.

—“Baby’s Coming Home” was written by Jerry Reed and Chet Atkins recorded it for his ‘Chet Atkins Picks on Jerry Reed’ album. What quality does this song have that attracted you to record it?

RICHARD: This is one of those tunes that every thumb-picker knows. A real standard among that crowd. Another simple melody with a great groove. These tunes are not known to the mainstream crowds, but there are guitar pickers dotted around all over the world that will come out of the woodwork to meet like-minded folks at concerts or festivals and get together and play these kinds of tunes from records they all had. When I was at school, there wasn’t another kid in my school or any other local school that was listening to this stuff that I knew of. I’m sure it was the same for Tommy. But!! There were players out there. These records weren’t getting airplay like pop records, but there were a select few pickers out there buying these records. There must have been, or RCA would never have invested in putting more and more out there. You wonder who those people are, and they are out there. When you meet them, it’s always great because you realize you were not alone in your pursuits and thirst for learning this music that was so obscure that it seemed like you were the only one listening to it. At least, as a kid, that’s how it felt. Playing these tunes with Tommy is always special. We’d played all of them together over the years many times either jamming or on shows or festivals. I never get tired of playing them and I can feel that with Tommy, too.

—It’s exciting news that the two of you will tour together this November in America (having done shows in the past). What are you most looking forward to about this tour?

RICHARD: Oh yeah! Always a blast playing shows with Tommy. Playing the music, of course, is what I look forward to most, but being out west, too. AZ and TX. I love the desert, you know. In certain places, I feel like I’m on Mars, or in a scene from the original “Planet of the Apes” movie. Meeting new people, going to different places, or back to some of your favorite places. So many folks I’ve met think being on the road is such a tough life. To me, it’s like being on vacation and instead of living in one place, you kind of get to live everywhere. It’s a beautiful thing. Living everywhere, seeing so many places, doing what you love, and playing your favorite music with one of your all-time favorite musicians and people? It makes me giddy. I can’t wait.