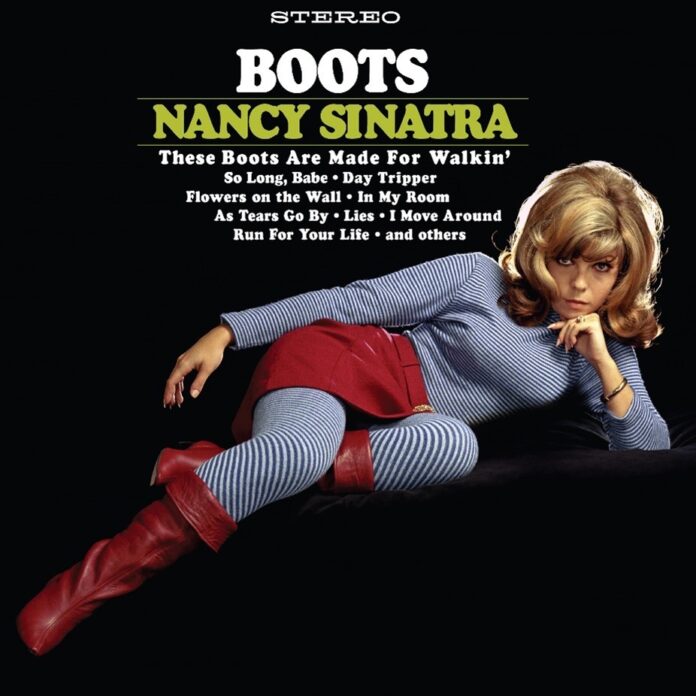 Celebrated archival label Light in the Attic (LITA) is proud to announce the second release from their Nancy Sinatra Archival Series, the definitive version of her inimitable debut LP, Boots. Originally released in 1966, the enduringly iconic, million-selling album not only catapulted the career of singer, actress, activist, and cultural icon, Nancy Sinatra, it contained within its grooves an enduring anthem of empowerment that continues to resonate with new audiences today with no signs of slowing down.

Available to pre-order now and due out September 17th on vinyl, CD, 8-track, and across digital platforms, Boots marks Sinatra’s transformation from “Nancy nice lady,” as she says, to a fully-formed and self-assured figure of empowerment both in appearance and in performance, making her forever synonymous with the album’s titular subject in the process. A Top 5 album at the time of its release, Sinatra scored a No. 1 hit on both sides of the Atlantic with “These Boots Are Made For Walkin’,” which earned three GRAMMY nominations and sold over a million copies. The album marked her first full-length release with writer, producer, and collaborator, Lee Hazlewood, which features a mixture of Hazlewood-penned tunes and selections from heavyweights, such as The Beatles, Bob Dylan, The Rolling Stones, and more. The successful collage of 60s material hangs beautifully together with support from the famed Los Angeles session musicians, The Wrecking Crew, who set the stage for Nancy’s vocals with their raw, jangly, exuberance and cohesion. Tying it all together is arranger and longtime collaborator Billy Strange, whose innovative arrangements provided the perfect sound to help Nancy capture the attention of the world. In addition to the original 13 recordings, the forthcoming reissue includes two rare bonus tracks, including “The City Never Sleeps At Night” and the previously unreleased “For Some,” the latter of which is available now across all digital platforms as the first single being offered. All tracks have been newly remastered from the original analog tapes by GRAMMY®-nominated engineer, John Baldwin.

This year marks the 55th anniversary of the world-wide smash hit “These Boots Are Made For Walkin’” and to coincide with the reissue announcement is the debut of an updated version for the track’s original 1966 music video featuring restored video and the newly remastered audio by Baldwin. In addition, new autographed items and limited-edition merchandise collaborations with Midnight Rider, Oxford Pennant, and Windmill City premiered this week at Nancy’s official online BOOTIQUE.

Equal parts strong, sultry, and savvy, Sinatra has long been ahead of her time – both in her choices as an artist and as a businesswoman. Unapologetically, the singer established her own path early-on and paved the way for decades of female artists to come – all while firmly maintaining control over her career, her image, and her music.

As the eldest daughter of Frank Sinatra, Nancy was born into the spotlight. At 19 she made her professional debut in front of millions of Americans, appearing alongside her father and Elvis Presley on the television special Welcome Home Elvis. Not long after, she released a series of singles. But those demure recordings didn’t reflect the real Nancy Sinatra – that Nancy would be re-introduced to the world just a few years later, thanks to an unlikely musical partnership with songwriter and producer Lee Hazlewood.

When the two artists had their initial meeting in 1965, Sinatra was newly-divorced and struggling to score a hit record amid the changing musical landscape. At the urging of her label, she met with Hazlewood – a 36-year-old songsmith from Oklahoma who had found success writing for guitarist Duane Eddy. Hazlewood auditioned material for Sinatra, including a song called “These Boots Are Made for Walkin’,” which he originally intended to record himself.

Sinatra, however, saw the song in a different light. In her liner notes for LITA’s compilation, Nancy Sinatra: Start Walkin’ 1965-1976 (released digitally on February 5th, as well as in 2-LP/CD formats on March12th in North America and March 26th everywhere else), Amanda Petrusich (author and music critic at The New Yorker) explains that the singer “understood that a man brazenly chastising his partner for her misbehavior and threatening retribution…was too ugly and portentous for pop radio. When a woman performed the track – and Sinatra sang it with a kind of playful, admonishing growl – it became an empowerment anthem, promising dignity and control in the face of betrayal. There’s something nearly flirtatious in her delivery: you’re trouble, but I’m trouble, too. Somehow, she made ‘Boots’ radical.”

With Hazlewood as producer, Sinatra went into the studio with Billy Strange and other members of the legendary Wrecking Crew to record the song – along with a handful of pop covers and originals – for her debut album, Boots. Gone was the prim brunette singer and in her place was a confident, fashion-forward new star, with a commanding contralto voice and eye-catching platinum hair.

Released in 1966, Boots was a Top 5 album, thanks to its brazen title track. Sinatra scored a No.1 hit on both sides of the Atlantic with “Boots,” which earned three GRAMMY® nominations and sold over a million copies. As a testament to its enduring, multi-generational appeal, “Boots” has inspired countless covers throughout the decades, including those by Loretta Lynn, Kacey Musgraves, Billy Ray Cyrus, and Jessica Simpson.

While “Boots” became Sinatra’s signature song, she and Hazlewood were just at the beginning of their creative journey. Soon, they returned to the studio, notching two more Top Ten hits with “Sugar Town” and “How Does That Grab You, Darlin?,” and recorded their first of many duets, titled “Sand,” for Sinatra’s sophomore effort How Does That Grab You? (1966), which also featured a cover of the Sonny Bono-penned tune “Bang Bang (My Baby Shot Me Down)” ─ a breakthrough hit for Cher earlier that year. Accompanied only by Billy Strange on guitar, Sinatra’s sparse rendition stood in stark contrast to Cher’s orchestrated arrangement. Decades later, the haunting recording gained a new legion of fans when it appeared in the opening credits of Quentin Tarantino’s 2003 film, Kill Bill Volume 1.

As Sinatra’s star continued to rise, she was tapped to perform the theme song to the 1967 James Bond film, You Only Live Twice. A rare honor, Sinatra traveled to London for the session, where she worked with film composer John Barry. Not long after, she recorded a stripped-down, single version of the song with Hazlewood.

Each time Sinatra recorded a new album, the tracklist inevitably contained a duet or two with Hazlewood, including “Summer Wine” (Nancy in London), as well as “Jackson” and “Oh Lonesome Me” (Country, My Way). It was a natural evolution then for Sinatra and Hazlewood to release entire albums together. The first was 1968’s Nancy & Lee, which blended country, rock, psychedelia, and pop on tracks like “Some Velvet Morning” and “Lady Bird.” They followed with 1972’s Nancy & Lee Again, which boasted such highlights as “Paris Summer” and “Arkansas Coal.”

Over the years, these offbeat duet albums have become lauded cult classics. Pitchfork included Nancy & Lee on their “Best Albums of the 1960s” roundup, while NPR proclaimed that “[Sinatra’s] work on Nancy & Lee not only is some of the best that she’s ever recorded, but it proved that she would hardly allow herself to be pigeonholed…. She made it clear that she was capable of so much more.” Though Hazlewood’s relocation to Sweden at the turn of the ‘70s would halt the progress of further collaborations, the duo reunited sporadically over the years, including in 1976 for a dreamy cover of “(L’été Indien) Indian Summer,” which was also the first single offered (10/21/20) off LITA’s Start Walkin’ comp.

In the mid-70s, Sinatra made the conscious decision to step back from the industry and focus on her family. Although she would return to the studio in the ‘90s, the artist had already amassed an impressive catalog in less than a decade – including seven solo albums and her two collaborations with Hazlewood. Sinatra’s legacy, however, continued to grow, as new generations discovered her music. Over the years, she has been cited as an influence by countless artists, including Sonic Youth, Morrissey, Calexico, U2, and Lana Del Rey. Most recently, Sinatra’s contributions to the industry were further recognized by her peers, when “These Boots Are Made For Walkin’” was inducted into the GRAMMY® Hall of Fame. The honor, bestowed in January of 2020, recognizes “musical recordings of lasting qualitative or historical significance.”

Today, Sinatra continues to be a passionate voice for a variety of progressive causes – most notably her support of veterans. A self-proclaimed feminist, Sinatra’s advocacy also extends to her fellow female artists. Petrusich writes that Sinatra “has always insisted on owning all of her masters, a maneuver she learned from her father; she has since passed his counsel onto younger artists struggling to regain control of their work under unfair contracts.” In the liner notes, Sinatra recalls, “I gave that advice to Taylor Swift a couple of years ago. She was fighting for her masters and I said, ‘Keep fighting. You’ve got to. You have to have control of that product.’ I was proactive early on, and I still am.”