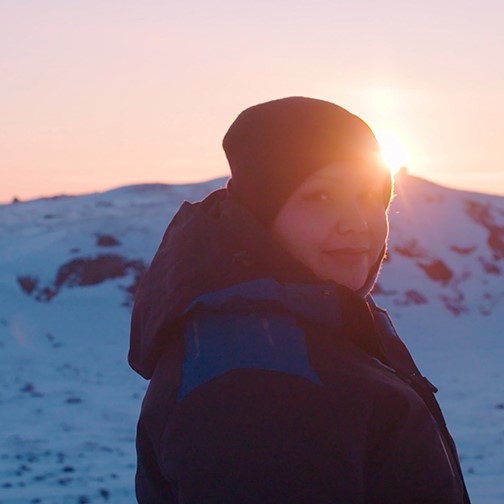 The song serves as a preview to her forthcoming debut album, Therapy Sessions. The release sees Seeteenak focus her music on telling her truths, and shining light on the struggles that Inuit people face in Canada — a humble cause, and often a very dark and sobering reality.

Shrouded in uplifting pop-piano chords and dance-worthy bass lines, these “truths,” as Seeteenak calls them, include “mental health, sobriety, breaking stereotypes, overcoming barriers, surviving the north, and trying to heal.”

Featuring lines like ‘you can change your life if you pick up where you left it,’ and ‘life would be easy, life would be perfect, but then, believe me, it wouldn’t be worth it,’ Seeteenak has audiences right where she wants them: inspired and emboldened, ready to be uplifted into greatness.

Listening to “See The Light” helps give insight into Seeteenak’s ability to speak directly to her listeners. Speaking directly to the thousands of young Inuit whose parents were taken away to residential schools, Seeteenak reassures them: ‘I know you’ve been hurt before, but I want you to know it’s not your fault.

‘Keep on fighting for us. Someday we’re gonna see the light.’

Not only is the production style finessed to a tee, but the lyrics also speak to Seeteenak’s fight with her internal struggles; while her music may sound light-hearted and poppy, one listen reveals Seeteenak to be an authentic storyteller overcoming powerful vices.

On a personal level, 2021 marked a landmark milestone in Seeteenak’s sobriety journey. “Yesterday marked my two years being alcohol free!” she said of the occasion this past May. “Man, I feel like I’ve accomplished a lot these couple years. I’m able to think clearly, get dedicated to something worthwhile like writing music, or exercising.

“It’s nice to not wake up anymore thinking ‘wtf did I do this time?’ she continued. “Today, I want to stay sober for my health — physically, mentally, and emotionally. It makes dealing with stressors much easier.”

As an Inuk living in Iqaluit, Seeteenak is surrounded by Inuit culture. This has given her a unique perspective on songwriting, music production, and performance and, in 2019, she began working with Iqaluit-based record label, Hitmakerz, to develop her career and produce Therapy Sessions.

On top of this, Seeteenak has been busy collaborating with others for the rest of her fantastically inspired album, including Greenland’s Peand-eL, as well as Nunavut’s current Member of Parliament, Mumilaaq Qaqqaq from the NDP.

She has also teamed up with fellow Inuk artist, Aasiva, in one of her more emotional songs, “Better With You.”

“See The Light” is available now.