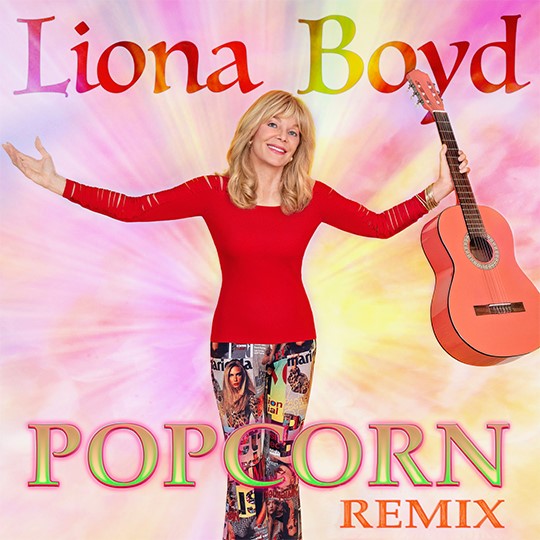 A vibrant arrangement for classical guitar, complete with a retro disco feel, “Popcorn (Remix)” is certain to get audiences up, and out of their seats dancing.

“This version of ‘Popcorn’ has been several years in the making,” Boyd reveals of the newly reimagined tune. “I’m so happy to finally be sharing both this instrumental song, and video!”

Filmed in Toronto, as well as Palm Beach, Florida, the playful and colourful video radiates Boyd’s love of life — all while continuing to highlight her tenured career enthralling millions with her signature romantic spin on classical, folk, and world music.

“I filmed the video in a studio in Toronto with messy, colourful scribbles on the wall,” she reveals, of the song’s accompanying video. “I danced in five-inch spike-heel platform shoes, and wore a funky bell-bottom outfit I found in a little store on Yonge Street.

“After a quick change, I pranced around in a designer green and black evening gown — which was first featured in my video for Vivaldi’s ‘Allegro.’ For fun, I even painted my fingertips pink, and wore a chunky turquoise ring my late mother and I had chosen in Arizona back in the 60s, as well as some pink enamel earrings from my jet-set days in Acapulco…

“Later, I filmed in various locations in Florida, and we also included some clips from my ‘former life’ in Los Angeles.”

It’s personal details like these that weave throughout the video in its entirety, and ones that further immerse and endear Liona Boyd’s legion of fans even more.

“The video is full of call-backs to my past,” she says. “There’s a mini clip of my beloved cat, Muffin, a snippet of Venice, San Miguel del Allende, Moorish Dance, and the Bel Air shoot carrying the white parasol my mother gave me one birthday…

“The video also uses images superimposed from some of my oil paintings, as well as those of my late father,” she details. “It also features several guitars — including one purchased in Istanbul in 2016.

“This was a fun little number to arrange and memorize, and I hope everyone enjoys it!”

Recipient of both the Order of Canada and the Order of Ontario, Liona Boyd is the winner of five JUNO Awards, five Guitar Player Magazine’s Classical Guitar Musician of the Year awards, Vanier Award, Women Who Make a Difference award, Prix ‘Esprit du Ciècle, and Artist of the Year and Honorary Mayor of San Antonio, Texas — plus four Honorary Doctorate of Law degrees and an Honorary Doctorate of Music degree. She has received a Lifetime Achievement Award from the National GUITAR Museum, joining the accolade’s ranks among fellow peers B.B. King, Glen Campbell, Bonnie Raitt, and more, as well as a Lifetime Achievement Award from the JoAnn Falletta International Guitar Competition, and inducted into Guitar Player Magazine’s Gallery of Greats.

Since the beginning of her career in 1974, Boyd has released 28 albums — many of which have been Gold- and Platinum-selling. She has upwards of 16 Million streams across platforms, and rising, and her Holiday special, A Winter Fantasy, continues to be televised nationally via PBS and CBC across the United States and Canada, respectively.

Liona Boyd has appeared in countless outlets around the world, and collaborated with the likes of Sir Andrew Davis, Yo Yo Ma, Eric Clapton, Gordon Lightfoot, Tracy Chapman, Ronnie Hawkins, and Olivia Newton-John, to name a few. The author of two books, No Remedy for Love and In My Own Key, Boyd is also a dedicated philanthropist and activist for a lengthy selection of charities close to her heart.