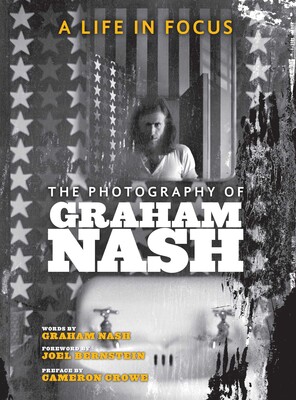 Music legend, photographer, and artist Graham Nash reflects on more than fifty years of an extraordinary life in this extensive collection of personal photographs, paintings, and mixed-media artwork. A Life in Focus The Photography of Graham Nash gets released on November 16, 2021.

In this curated collection of art and photography from his personal archive, Graham Nash’s life as a musician and artist unfolds in vivid detail. Best known as a founding member of the Hollies and supergroup Crosby, Stills & Nash, Graham developed a love of photography from the time he was a child. Inspired by his father, Nash began taking pictures at 10 years old and would go on to take his camera with him ever since—on tour with the Hollies and later CSN and CSNY, among friends at Laurel Canyon and abroad. Many of his photographs depict intimate moments with family and friends, among them Joni Mitchell, Stephen Stills, and Neil Young. This volume presents these images alongside Nash’s own reflections, telling the story behind the pictures and giving insight into the life of one of the greatest musicians of all time.

Legendary artist Graham Nash is a two-time Rock and Roll Hall of Fame inductee—with Crosby, Stills & Nash and with the Hollies. He was inducted twice into the Songwriter’s Hall of Fame, as a solo artist and with CSN, and he is also a Grammy Award winner. Towering above virtually everything that Graham Nash has accomplished in his multifaceted career stands the litany of songs that he has written and introduced to the soundtrack of the past half century. His remarkable body of work, beginning with his contributions to the Hollies opus continues all the way to This Path Tonight (2016), his most recent solo album. The original classic union of Crosby, Stills & Nash (& Young) lasted but twenty months, yet their songs are lightning rods embedded in our DNA. In addition to his string of solo albums, he has performed and recorded with David Crosby as Crosby/Nash. His passionate voice continues to be heard in support of peace and social and environmental justice. The No Nukes/Musicians United for Safe Energy (MUSE) concerts he organized with Jackson Browne and Bonnie Raitt in 1979 remain seminal benefit events. In September 2013, Nash released his long-awaited autobiography Wild Tales, which landed him on the New York Times Best Sellers list. In recognition for his contributions as a musician and philanthropist, Nash was appointed an Officer of the Most Excellent Order of the British Empire (OBE) by Queen Elizabeth II. While continually building his musical legacy, Nash is also an internationally renowned photographer and visual artist whose work has been shown in galleries and museums worldwide, and his photography has drawn honors including the New York Institute of Technology’s Arts & Technology Medal, an honorary Doctorate of Humane Letters, and the Hollywood Film Festival’s inaugural Hollywood Visionary Cyber Award.