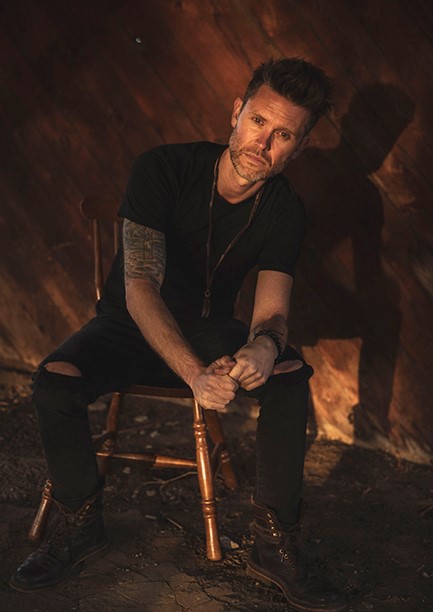 New love can be so intoxicating that we want to slow down every single moment, draw it out, and savor it, making the feeling last forever. And Vernon, BC singer-songwriter Andrew Allen’s new single “Linger” – available now – captures just that: the slowing down, to the point that a lover’s every breath and heartbeat takes on a profound meaning.

A pop earworm that alternates between love ballad and dance tune, “Linger” makes use of simple beats, hook-y harmonies, and well-placed breath and heartbeat effects. Lyrics like ‘go slow/I like to let it linger/you know my knees are getting weaker’ harness that universal feeling of infatuation; listeners experience the slowed-down beauty of noticing all the new things about a love interest, and then the joyful, dance-y exuberance of just knowing that that person exists in the world and our love is returned.

“’Linger’ dives into the intimate connection between two people and the desire you can’t help but see, feel, and want more of,” Andrew says.

The song teases the British Columbia-based artist’s upcoming new album, 12:34 — a release set to document the ‘turning upside down’ of his life.

Its title, 12:34, is an ‘angel number’ Andrew says he’s seen repeatedly over the last few years, and one many believe is the universe’s way of communicating with us. “12:34 can be seen as a number of progression and/or steps along a journey or life path,” he shares. “It indicates that you may have to put some hard work and effort towards a new project, venture or important life change.”

The album catalogues all the various ups and downs that come with major change — from gaining the awareness that you’ve been numb in “Don’t Feel Much,” to reflecting on a breakup in “Did I Ever,” to experiencing new love in “Wanted” and “Linger,” all the way to the importance of a good support system through it all found in “My Friends.”

His benchmark single “Loving You Tonight” got him signed to Epic Records, and helped put him on tour with acts like Bruno Mars, One Republic, Andy Grammer, The Script, Train, Joshua Radin and The Barenaked Ladies. As a songwriter, he’s written with the likes of Meghan Trainor, Carly Rae Jepsen, and Tyler Shaw, to name a few.

His new album 12:34 will be available in October, and his new single “Linger” is available now.