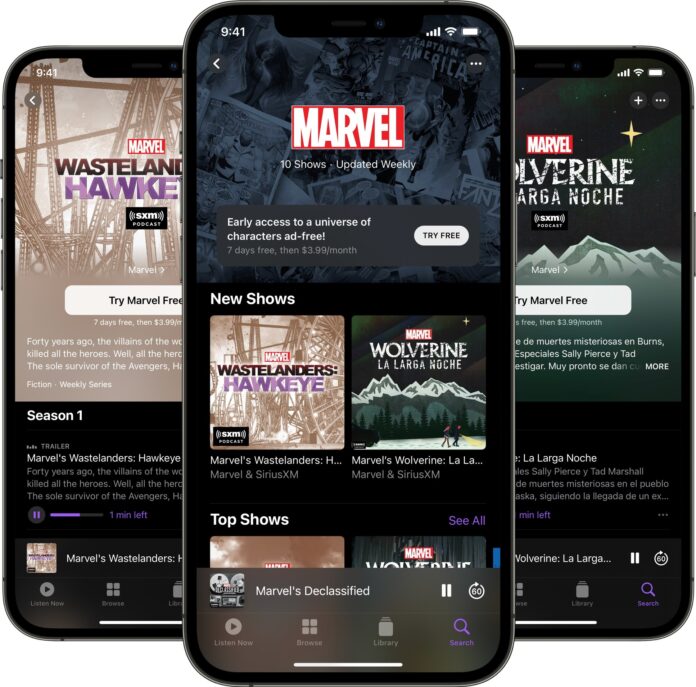 Marvel Podcasts Unlimited provides subscribers with early and exclusive access to a growing assortment of original new scripted and unscripted podcast series from one of the world’s largest and most beloved entertainment brands, featuring fan-favorite characters such as Wolverine, Star-Lord, Hawkeye, Black Widow, and Doctor Doom.

With a subscription to Marvel Podcasts Unlimited on Apple Podcasts, fans can unlock access to exclusive programming including Marvel’s Declassified, a narrative documentary series that dives into the rich, dynamic, and evolving history of Marvel Comics, and get early access to Marvel’s first Spanish-language podcast series, Marvel’s Wolverine: La Larga Noche, an adaptation of Marvel’s Wolverine: The Long Night, which launches worldwide today with an entirely new voice cast.

In 2019, Marvel and SiriusXM announced a multi-year agreement to create new original podcast series available across major listening platforms including SiriusXM, Pandora, and Stitcher. Exclusive new episodes of Marvel + SXM Podcasts will continue to be available across other major listening platforms following their debuts on Marvel Podcasts Unlimited.