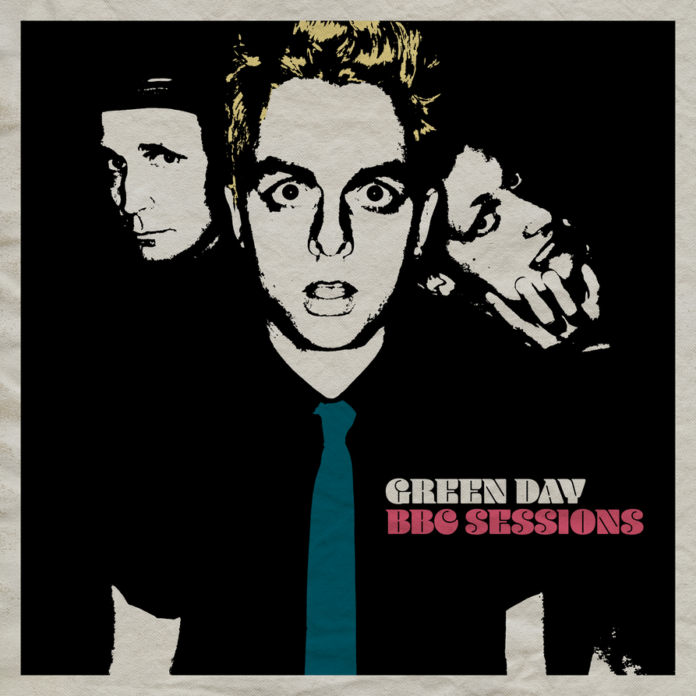 Opening up the vault and revisiting a series of historic UK broadcast performances, five-time GRAMMY Award-winning band Green Day proudly present The BBC Sessions live album out on December 10, 2021. The 16-track collection features four seminal performances recorded at BBC’s legendary Maida Vale Studios from 1994, 1996, 1998, and 2001 together on one album, marking the first time these recordings have been mastered for official release.

Four months after dropping Dookie upon an unsuspecting world, Green Day entered the hallowed halls of BBC’s Maida Vale Studios on June 8, 1994 and ripped through a raucous and raw four-song set: “She,” “When I Come Around,” “Basket Case,” and “2000 Light Years.” It captured the band on the precipice of their worldwide explosion. That day, they even took advantage of the free studio time—much like forbearers in the seventies and eighties—and even discovered the title of Insomniac’s eventual opener in the loo, “Armatage Shanks.” They returned to the BBC during 1996 in support of that album, turning up with “Brain stew/Jaded”and “Walking Contradictions.” Two years later, they snuck an F-bomb into a hyper-charged “Nice Guys Finish Last” in the midst of the Nimrod era. Finally, they capped off summer 2001 with four Warning anthems such as “Church On Sunday.” It’s all on The BBC Sessions.

The BBC Sessions will be available on CD, digital, and limited-edition 2LP vinyl configurations, including Sea Blue/Hot Pink vinyl for the band’s official store and Milky Clear Color vinyl for indie retailers. It’s complete with liner notes by Steve Lamacq Host of Radio 1’s legendary Evening Show (who was there at each session!).

The Rock and Roll Hall of Fame band is fresh off of The Hella Mega Tour, their sold-out North American headline stadium run, which brought the band to some of the most renowned stadiums including Dodger Stadium, Wrigley Field, Citi Field, Fenway Park and more. The tour will resume in the UK and Europe next Spring, click here for the full list of dates.

Berkley-formed, five-time Grammy Award-winning rock band Green Day is one of the world’s best-selling bands of all time, with more than 70 million records sold worldwide and 10 billion cumulative audio/visual streams. Their breakout album Dookie, which sold over 10 million and achieved diamond status, is widely credited with popularizing and reviving mainstream interest in punk rock, catapulting a career-long run of #1 hit singles. Green Day’s release of rock opera American Idiot captured the nation’s attention, selling more than 7 million copies in the U.S. alone, taking home the Grammy Award for Best Rock Album and lead to a critically acclaimed stage adaptation on Broadway. Released on February 7, 2020, Green Day’s thirteenth studio album Father Of All… (Reprise/Warner Records) debuted at #1 on Billboard’s Album Sales Chart and #1 in both the U.K. and Australia. Pitchfork declared, “Green Day’s most fetching and youthful songs in ages. The trio sounds reinvigorated, more like hungry newcomers staking their claim.”