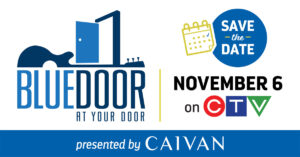 Tune in Saturday, November 6, 2021 at 7:00 pm for The Ottawa Mission’s second annual Blue Door At Your Door – a special one-hour TV fundraising show, hosted by internationally renowned comedian, Tom Green and presented by Caivan Communities on CTV Ottawa and via livestream nationally on The Ottawa Mission’s website at www.ottawamission.com

Blue Door At Your Door is a one-of-a-kind, star-studded television special, featuring some Canada’s top artists performing on one show for the very first time.

This year Blue Door At Your Door features performances by this stellar line-up:

One of Canada’s most iconic bands, Blue Rodeo have sold over 4 million albums, won countless Juno awards, been inducted into the Canadian Music Hall of Fame, received a star on Canada’s Walk of Fame, been named to the Order of Canada and have been honoured with the Governor General’s Performing Arts Award.

Internationally renowned singer/songwriter Bruce Cockburn is a legendary performer and Ottawa native, who has a long history of supporting great causes around the world, throughout his more than 50 year career. Bruce has just been announced as one of the 2021 inductees onto Canada’s Walk of Fame and he kicks off the reboot of the US leg of his 50th Anniversary Tour in December.

Montréal alternative rockers the Sam Roberts Band are without a doubt, one of Canada’s most amazing live bands. The multiple-Juno Award winners have released seven critically acclaimed albums, many of which have reached Gold, Platinum, or Double-Platinum sales.  They hold six spots on the Billboard Top 150 Canadian Airplay Songs (rock).  Having toured around the globe to their adoring fans, Sam Roberts Band released their latest album All Of Us, during the pandemic in October 2020 and will return to live touring again in 2022.

Alan Doyle— actor, producer, best-selling author, and best-known as lead singer for Newfoundland’s beloved Great Big Sea these past 20+ years hardly needs an introduction. With four solo albums under his belt, Doyle has been touring the world with his ace six-piece band for the last seven years. Doyle’s latest release Rough Side Out debuted #2 on the Billboard Canadian album chart, and #1 Canadian Country album upon release. Doyle has also released three best-selling books to date— Where I Belong (2014), A Newfoundlander In Canada (2017), and All Together Now (2020). Amidst these projects, Doyle found time to write music for and appear on CBC’s Republic of Doyle, guest on CBC’s Murdoch Mysteries, a role in 2014’s Winter’s Tale and 2010’s Robin Hood. Doyle hails from Petty Harbour, NL, and formed Great Big Sea in 1993 with Sean McCann, Bob Hallett, and Darrell Power, in which they fused traditional Newfoundland music with their own pop sensibilities. Their nine albums, double-disc hits retrospective, and two DVD releases have all been declared Gold or Platinum and have sold a combined 1.2 million copies in Canada.

Lauded as “one of the most exciting and talented young artists in country music” (Forbes), Lindsay Ell is a triple threat:  accomplished musician, unique vocalist and awe-inspiring songwriter. The Calgary native learned to play guitar while traveling with her father to country-bluegrass camps as a young girl. Ell honed her craft as a musical stylist and songwriter after being discovered by BTO and The Guess Who’s Randy Bachman (“American Woman” / “Taking Care of Business”) who discovered her at the age of 13. The multi-instrumentalist was soon touring alongside the likes of Luke Bryan, Buddy Guy, and Keith Urban. Ell also shared the stage with distinguished country group, Little Big Town, along with other powerhouse female artists in one the biggest moments of the 2019 CMA Awards where she was also nominated for Musical Event of the Year. Ell’s nominations do not stop there. She has been nominated for ACM New Female Artist of the Year in both 2019 and 2020, in addition to her 2020 ACM nomination of Music Event of the Year. Ell also won 2020 CCMA Interactive Artist or Group of the Year for the second year in a row. These wins and nominations are well earned after Ell exhilarated audiences as part of Keith Urban’s Graffiti U World Tour, Brantley Gilbert’s Not Like Us Tour, Brad Paisley’s Weekend Warrior World Tour and now Blake Shelton’s 2021 Friends and Heroes Tour. Ell’s first full-length album The Project debuted at No. 1 on the Country Album Sales Chart and was named Billboard’s “Best Country Album” of 2017. “What Happens In a Small Town,” Lindsay’s duet with Brantley Gilbert, claimed the top spot at country radio, marking her first No. 1 in the US. She has two No. 1 singles under her belt in Canada.  Her critically-acclaimed sophomore album, heart theory was nominated for “Country Album of the Year” at Canada’s prestigious Juno Awards and is currently nominated in five categories at this year’s CCMA Awards.

Powerhouse singer and 3-Time Maple Blues Award winner Miss Emily hails from Kingston, Ontario and has been lighting up stages across Canada with performances at Ottawa Bluesfest, Montreal Jazz Festival, Nanaimo Blues Festival, Kitchener Blues Festivals amongst many others, in support of her latest studio album “In Between”. For this special performance on Blue Door At Your Door, Miss Emily will be joined by Canadian rock legends, Rob Baker and Gord Sinclair of  The Tragically Hip!

Six albums deep and Juno Award winner Kellylee Evans is still shaking it up on Come On, her latest Decca album. The stylistic connoisseur has tackled everything from jazz to R&B and pop in such previous tasty classics fight or flight?, Nina – her Juno-winning tribute to the legendary Nina Simone – and I Remember When. Praised by the Latin Jazz Network for a “gorgeous voice (that) rises to the heavens in rapturous wonder as if in consanguinity with a chorus of angels” and by the Yukon Arts Centre for “a stunning crystalline voice, both powerful and emotive,” Evans now pushes her muse firmly into the soulful pop territory with Come On: a wonderfully refreshing album about love and life that comes on the heels of two nearly careerending accidents: a freak lightning strike in her Ottawa kitchen and further effects of a concussion suffered during a fall at her home.

The impact of the ongoing pandemic has been especially hard on those who are homeless and precariously housed, with many services these communities closed or only partially reopened to minimize the risk of Covid-19.

The pandemic has also been difficult for many people who were before just making ends meet. Given the collective impact on Covid-19 on people’s mental health, finances and perceived risk of homelessness, The Ottawa Mission expects to remain the first place of refuge for increasing numbers of vulnerable people for the next several years.

That’s why events like Blue Door at Your Door are so important to sustain The Mission’s programs and services that so many in our community rely upon, such as the Food Services Training Program, which provides the skills and credentials needed to work in a commercial kitchen, mental health programs, and addiction and trauma programs.

And that’s why The Mission is committed to bringing residents of Ottawa world-class music and food in the comfort of their own homes so they can relax and tune in for a great cause on November 6 to CTV Ottawa at 7:00 pm or the Ottawa Mission’s website.

Since 1906, The Ottawa Mission has been serving those who are homeless, hungry and lost by providing food, clothing, shelter and skills. In 2020-2021, The Ottawa Mission provided emergency shelter to an average of 185 men every night and served an average of 1,994 meals every day.  The Ottawa Mission also provides to men and women health services, mental health and addiction treatment programs, hospice care, dental services, housing services, educational support, job training, spiritual care, and clothing to thousands in need in our community. In September 2020, The Ottawa Mission marked the one millionth hour that the shelter has been in existence since its founding in 1906. In 2019, the Mission became a housing-focused shelter reflective of its commitment to a home for everyone as a human right with the launch of its housing department. Visit ottawamission.com to learn more.