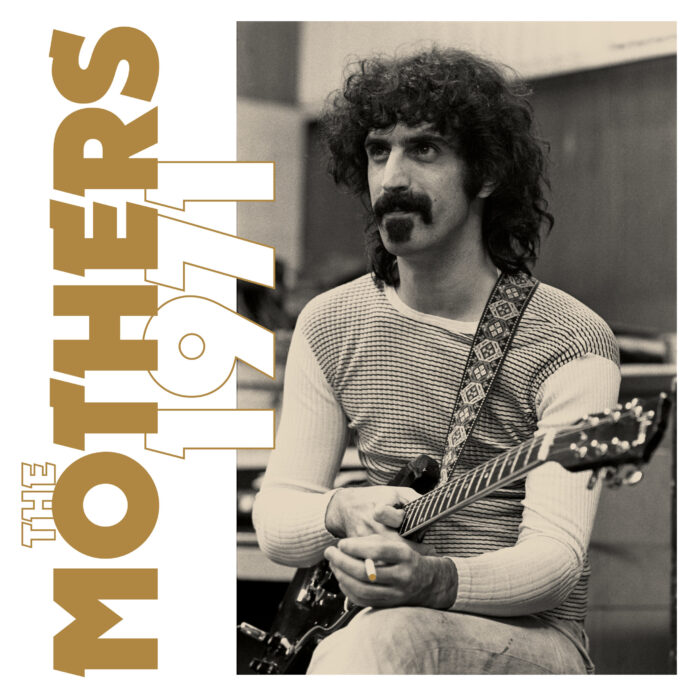 Released in August 1971 just two months after it was recorded, Fillmore East – June 1971 was Frank Zappa and The Mothers’ masterstroke conceptual live album, a well-oiled and well-edited aural treatise chronicling the prurient feast and famine of a certain band’s somewhat salacious life on (and off) the road. In effect, it was the seemly predecessor to October 1971’s expansive, groundbreaking magnum opus, 200 Motels, the surrealistic documentary and soundtrack which ultimately took on a life of its own. Even so, Fillmore East – June 1971, the landmark live recording with the scrawled “penzil” cover art made to resemble a bootleg of the day, managed to capture its own level of then-modern zeitgeist in patented Zappa-reconstructed form.

The ever-touring Mothers closed out 1971 with a European jaunt that saw them hitting Denmark, Germany, The Netherlands, and Austria before rolling into Switzerland for a December 4, 1971 show at the Montreaux Casino that will forever live in infamy in both song and legend. This was due to an errant fan setting off a flare gun and burning the place to the ground – along with destroying all The Mothers’ gear and equipment, sans one solitary cowbell.

Thankfully, the band and audience were relatively unhurt, but subsequent shows in France and Belgium were cancelled and The Mothers had to resort to wrestling with rented equipment for a planned pair of shows slated for December 10-11, 1971 at the Rainbow Theatre in London, England. Only the December 10th show came to pass, however, due to an event that changed the course of Zappa’s life forever. After the band played a cover of The Beatles’ “I Want To Hold Your Hand,” a crazed fan attacked him by violently shoving him off the stage into the orchestra pit 12 feet below. For some time, nobody knew whether Zappa was alive and there was complete confusion inside and outside the theater. As Zappa recounted in his 1989 autobiography, “The Real Frank Zappa Book:” “My head was over on my shoulder and my neck was bent like it was broken. I had a gash in my chin, a hole in the back of my head, a broken rib and a fractured leg. One arm was paralyzed.” Once he could finally leave the hospital and be returned to the States, he spent the better part of a year in a wheelchair and a leg brace. When all was said and done, he permanently sustained a lower pitched voice, one leg shorter than the other and chronic back pain. The Rainbow Theatre show would end up being the last ever performed by the Flo and Eddie lineup as the group disbanded while Zappa was in the hospital as they needed to continue to work while he recuperated. Once Zappa recovered from his injuries he ventured into other musical territories.

It’s these intriguing, intertwining roads that will be explored, examined, and celebrated like never before with the monumental and definitive new eight-disc/digital collection, The Mothers 1971, a new Super Deluxe Edition boxed set due March 18 via Zappa Records/UMe that showcases these special 1971 lineups and commemorates these storied chapters in Zappa’s legacy. Overseen by the Zappa Trust and produced by Ahmet Zappa and Zappa Vaultmeister Joe Travers, the 100-track, nearly 10-hour set brings together every note of the fabled four shows that closed down the vaunted Fillmore East in New York City on June 5-6, 1971, including the entire John Lennon and Yoko Ono encore, along with the full Rainbow Theatre performance in London, England, on December 10, 1971. Also included is an unreleased hybrid concert culled from June 1 and June 3, 1971 performances in Scranton and Harrisburg, Penn., which denote the first time Mothers shows were recorded on Zappa’s preferred, then-newly purchased ½-inch 4-track tape machine (throughout the ’70s, this was the main tape recorder used to document shows if the budget allowed). The extensive collection is rounded out with the original rare single for “Tears Began To Fall” and its non-album-track B-side “Junier Mintz Boogie,” signifying the single’s first re-release in 50 years and digital debut, as well as a homemade radio spot and its related outtakes. This release is significant for marking the first time the complete back-to-back double-header Fillmore East concerts have been released in their entirety, allowing fans to hear the full performances that Zappa edited the album from, and for the very first time anywhere, contains the official audio of the Rainbow Theatre show’s truly shocking ending which was thought to have not been recorded until recently discovered while putting this project together.

The Mothers 1971 will also be available digitally for streaming and download, in both standard and hi-res audio (96kHz/24-bit). Pre-order is available here: http://frankzappa.lnk.to/themothers1971PR

The majority of the box set’s unedited live tracks have been newly mixed from scratch by longtime Zappa Trust associate Craig Parker Adams at Winslow Ct. Studios and mastered by John Polito at Audio Mechanics. The complete historical Rainbow Theatre concert was newly mixed by legendary producer/engineer Eddie Kramer (his first Zappa Trust project to date) and mastered by Bernie Grundman. All recordings included on The Mothers 1971 were sourced from their original 2-inch, 16-track, 1-inch 8-track, and ¼-inch 2-track stereo analog master tapes discovered in The Vault and digitally transferred and compiled by Joe Travers in 2020, who then supervised the mixes in early 2021.

The Mothers 1971 boxed set comes in a CD size slimcase with all eight discs residing in their own respective mini-jackets, which are collectively housed within an inner slipcase, along with a comprehensive 68-page booklet showcasing a quite revealing, in-depth interview with key Mothers 1971 bandmember Ian Underwood as conducted by Ahmet Zappa, in addition to separate recollections and learned musings from Eddie Kramer and then-bassist Jim Pons alongside detailed, tape-by-tape liner notes from the ever-irrepressible Joe Travers, and historical photos from famed photographer Henry Diltz.

The Mothers lineup that ruled the Fillmore East roost in New York City for four extraordinary sets across two back-to-back nights on June 5-6, 1971 consisted of Ian Underwood (winds/keyboards), Aynsley Dunbar (drums), Jim Pons (bass/vocals/dialog), Bob Harris (keyboards/vocals) and was rounded out by Howard Kaylan (lead vocals/dialog) and Mark Volman (lead vocals/dialog), aka Flo & Eddie of The Turtles, with special guest Don Preston. It was a fitting Mothers collective chosen to close the renowned NYC venue, and they performed such iconic tracks like “The Mud Shark,” “Bwana Dik,” and the groupie routine labeled as “Do You Like My New Car?” (For his part, Don Preston provided Mini-Moog at Fillmore East, then rejoined The Mothers fulltime to take over for Bob Harris on keyboards and vocals for the band’s ensuing summertime dates and onward, through that December.)

The June 1971 Fillmore East finale was made even more special thanks to John Lennon and Yoko Ono appearing alongside Zappa and The Mothers to perform a final encore for the unsuspecting crowd, including a red hot version of Walter Ward’s “Well” led by John on vocals (an old Beatles live favorite from the Cavern Club in Liverpool) with two solos by Zappa, a seminal reading of “King Kong” that soon enough metamorphosized into an extended jam ultimately called “Scumbag” as well as further improvisational vocal ululations from Yoko with guitar feedback by John and backing from The Mothers.

Zappa had plans to release this historical encore in its entirety after mixing it in 1971, but shelved it after John and Yoko released their own encore mixes on Side 4 of June 1972’s Sometime in New York City. Zappa eventually released his version of the encore as part of October 1992’s Compact Disc, Playground Psychotics.

After being awarded the rights to his back catalogue in the early 1980s, Zappa mulled other plans for releasing the encore, but upon inspection of the returned Fillmore East masters, it was discovered the Lennon encore tape was missing from its master tape box. In 2021 following a request via Universal, the Lennon Estate kindly provided the Zappa Trust and UMe with a high-resolution transfer of the multi-track safety reel (which FZ had made for them in 1971), thus ensuring that, for the first time in 50 years, the full encore performance could be heard, remixed, in its entirety.

Vinyl lovers will also be able to get their fill via a pair of concurrently released individual 3LP configurations. First, the expanded 50th anniversary 3LP vinyl edition of Fillmore East – June 1971 will have a remaster of the original 1971 live album on LP1 along with 2 LPs of bonus tracks, including the John Lennon and Yoko Ono encore and the complete masterpiece “Billy The Mountain,” plus liner notes by Joe Travers. Significantly, the vinyl version of Fillmore East has been expanded to include vintage, period-perfect Zappa mixes, some of which are not included in the CD box set and can’t be found anywhere else. The original album appears on Sides 1 and 2, while Sides 3, 4, 5, and 6 contain the original “Billy The Mountain” as well as Zappa’s original version of the John & Yoko encore along with other material from the original mix sessions of the Fillmore East album. The Fillmore East 50th Anniversary Edition 3LP set was cut by Chris Bellman at Bernie Grundman Mastering.

As Travers keenly confirmed in his always enlightening liner notes, the Fillmore East 1971 tapes were “the first time that The Mothers were recorded live on 16-track analog tape. Previously, all live recordings were captured on 1-inch 8-track or lower.” Barry Keene, the recording engineer for these dates, also used a ¼-inch 2-track machine to capture a line mix. Though not all of the 16-track tapes have survived over the years, Travers and company were able to utilize the 2-track board tapes to fill in any missing gaps.

In his truly illuminating interview with Ahmet Zappa in The Mothers 1971 booklet, Ian Underwood zeroed in on Frank’s inherent talent for writing out all his original music perfectly, note for note, a la Mozart – music Underwood was always more than happy to play for its originator. “He knew what he wanted. He didn’t have to worry about mistakes,” marveled Underwood in the Ahmet Q&A. “Frank had a clear idea and he could just write it down. That is an amazing thing to be able to do.”

For his part, bassist Jim Pons synopsized the crux of Zappa’s creative biscuit. “Frank himself always seemed carefully guarded but I found he was an astute observer of the human condition – something I really admired,” Pons wrote in his portion of the liners.

Though it all came crashing down to an untimely end, The Mothers’ masterful musicianship that was on full display during multiple critical junctures in the latter half of 1971 has now been brought together for the first time in this riveting new collection, The Mothers 1971.

LP 1: SIDE B1. Willie The Pimp – Part II2. Do You Like My New Car?3. Happy Together4. Lonesome Electric Turkey5. Peaches En Regalia6. Tears Began To Fall