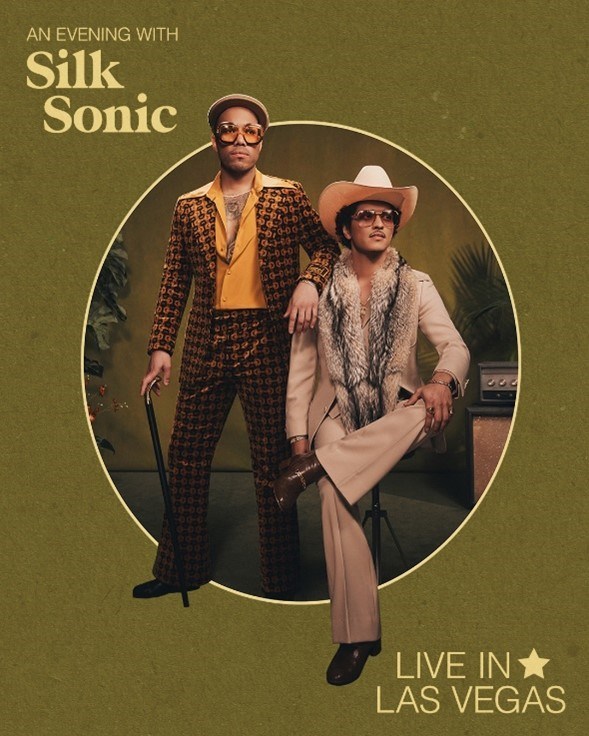 **All shows are scheduled to begin at 9 p.m.

Tickets start at $125, plus applicable service charges, and go on sale to the general public Friday, Jan. 21 at 10 a.m. PST. Pre-sales begin Wednesday, Jan. 19. Tickets can be purchased online at ticketmaster.com.

Silk Sonic introduced “Leave The Door Open” in March 2021 alongside an official music video directed by Bruno Mars and Florent Déchard, which won Best R&B Video and Best Editing at the 2021 MTV Music Video Awards. The track was followed by a hugely popular social media campaign, #LetSilkSonicThrive, which earned them a debut live performance at the GRAMMY Awards (plus a powerful tribute to Little Richard) followed quickly by iconic live sets at the iHeartRadio Music Awards and the BET Awards.

“Leave The Door Open” became Silk Sonic’s first #1 single on the Billboard Hot 100, spending two non-consecutive weeks at #1 and 18 consecutive weeks in the top 10. In the meantime, their infectious jingle co-written and performed for SelvaRey Rum amassed widescale praise over the summer. The duo then coasted into their sophomore release of “Skate,” which saw them glide into a second top 10 hit on Billboards Hot R&B/Hip-Hop Songs as it debuted at #4 and began as the genre’s best-selling song of the week.

“Smokin Out The Window” arrived in November 2021 with Billboard noting how “Anderson .Paak and Bruno Mars take it all the way back to the 1970s Soul Train era in the retro video. [It]finds them going through their choreo on an old school TV set while rocking wide lapel tuxedo jackets.” Following the vibey single, the duo released the critically acclaimed album, An Evening With Silk Sonic. Silk Sonic is officially GRAMMY nominated with their debut hit and 2021 summertime anthem, “Leave The Door Open,” earning four 2022 GRAMMY Awards nominations in Record of the Year, Song of the Year, Best R&B Performance, and Best R&B Song categories.