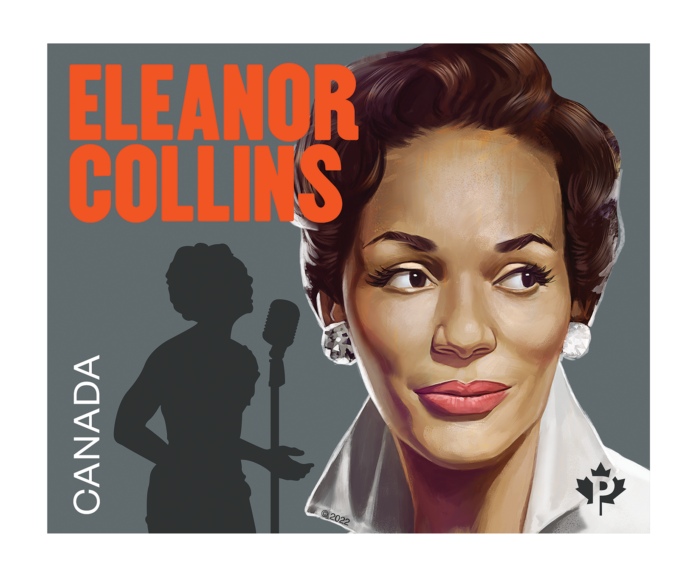 Canada’s first lady of jazz Eleanor Collins is getting her own commemorative stamp.

The stamp features an illustration by David Belliveau based on photographs by Franz Lindner, CBC Still Photo Collection. The cover of the booklet features an enlargement of the stamp image; the inside includes a photo of Collins on the set of the television program Quintet on January 3, 1962, also by Lindner.

A living legend at 102 years old, Collins was born in Edmonton, Alberta, on November 21, 1919. She grew up singing gospel with her family before winning a talent contest at age 15 that ignited her musical career. Collins moved to Vancouver in the late 1930s, and her mesmerizing vocals and sophisticated style were soon gracing the stages of clubs and concert venues as well as on recordings and live radio broadcasts, alongside Canada’s top musicians.

Collins was a trailblazer – becoming the first female Canadian jazz artist (and one of the first Black performers in North America) to host a national television series, The Eleanor Show, in 1955. She hosted a second namesake TV series – Eleanor – in 1964.

Collins was determined to confront and combat racial prejudice by cultivating the principles of equality and acceptance through her professional work and her volunteer work. She appeared as both a lead and a guest on numerous TV and radio shows through the 1950s, ‘60s and ‘70s and was still performing in concert well into her 90s.

Collins has received several lifetime achievement awards and other accolades, including being appointed a Member of the Order of Canada in 2014.