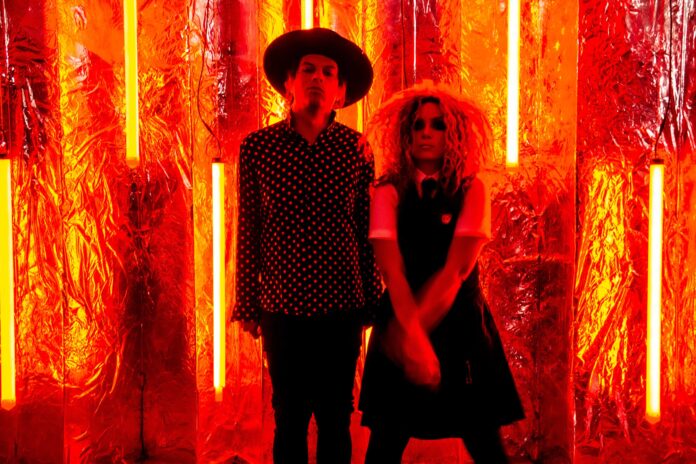 “’Blacked Out’ is a cry for help in disguise,” The Manic Boys and Girls Club admits. “We’re lost, overmedicated, depressed and hiding behind bathroom selfies, late nights, and lip gloss.

“Raised strict Catholics, children of immigrant parents, and sent away to live in rural Portugal with their grandmother — who had previously been a nun — The Manic Boys and Girls Club is more than a band,” co-fronts and siblings Bela and Fernando Ferrieira explain. “It is an escape from the submissive existence that was reality, an escape from the disposable music packaged for the masses, and an escape for any misfit looking to join the club.”

In its original form, “Blacked Out” already rages out of the gates, unrelenting in its pulsating bass and ineffable synth. Now, Paul Andrews’ treatment of the track reveals an nostalgic, ethereal vibe unique to the composer behind endless scores for the likes of HBO, ABC, NBC, FOX, MTV, WWE, and OLN releases, and more could wrangle.

“We met Paul in Los Angeles,” Bela recalls. “Neither of us remember who exactly put us in touch; I don’t know if it was the ‘European background’ thing, but we hit it off right away.

“We listen to a pretty wide spectrum of music,” she continues. “One guilty pleasure of ours is retro new wave, and some of the heavier electronic music that came from that. When we talked about doing a remix, our British friend with an industrial and goth background who now scores European horror films seemed like the obvious call we had to make.”

“Besides being a great producer and musician, Paul is the best storyteller,” Fernando adds. “Having had multiple record deals, tours, and even living in an apartment off Sunset Strip next to Motorhead’s Lemmy, there was never a shortage of material. Whenever we’ve been together to work, the time spent has probably been spent 10% on productivity, and 90% just hanging over beer.”

As for The Manic Boys and Girls Club’s co-fronts, the pair share equal responsibility to the group: Bela’s haunting vox, balanced with Fernando’s savoury harmony, their dual talent snagged the attention of producer Gavin Brown (Glorious Sons, Billy Talent, Mother Mother), who would go on to produce their EP. “We are pretty stubborn and very opinionated when we work, so the fact that an award-winning producer like Gavin Brown put up with us, and actually saw eye to eye with us on various ideas, feels like a miracle,” the band explains.

The result is a collection of five songs recounting the two loners’ experience touring in a van, as well as relationships, and bad habits. “Every song starts with a lyric and a melody,” they say. “No matter how it is produced, every one of our songs can be a lullaby.

“When we play as a duo, our music is heard as it was initially written.”

For Bela and Fernando, the essence of songwriting comes from growth in the studio. Eternally tweaking, ever adjusting, the songs they bring to the recording session can continue to shape shift and morph entirely. “The two of us have always agreed that a song is never finished,” they say. “You just choose to stop and record it at a certain point so, as we play music, perform, whatever… We continue the development of these songs. Everything keeps growing.”

It’s the fearlessness of their ideas, and their shared love of risk-taking that lands The Manic Boys and Girls Club in a lane all their own. Traveling down a rock highway and picking up pop and dance hitchhikers along the way encapsulates a sound they’re equally rediscovering, and reimagining.

For those who fell hard for the earliest rock/synth crossovers of the early 2000s, join the club. The Manic Girls and Boys Club. There’s always room for one more misfit.

“Blacked Out” and “Blacked Out (Paul Andrews Remix)” are available now.