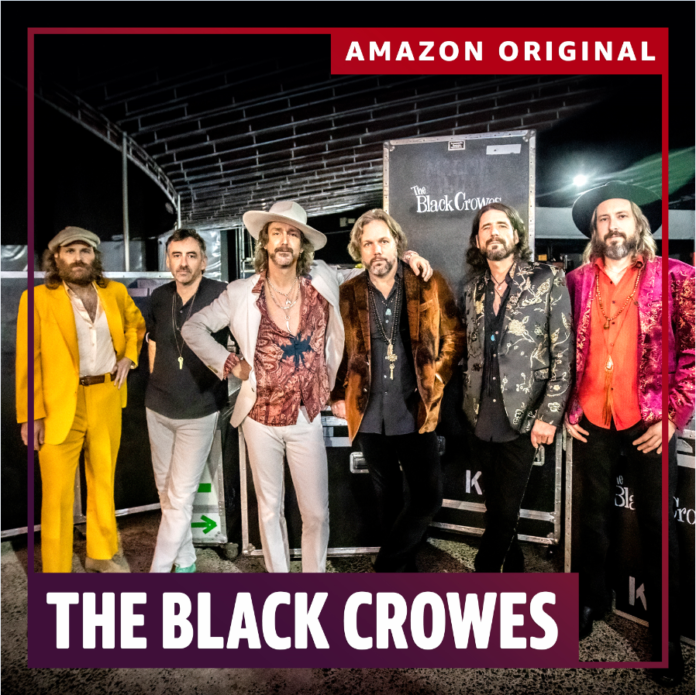 Legendary rock band The Black Crowes announced the release of a new, Amazon Original EP, 1972.  A tribute to the 50th anniversary of some of the best rock-and-roll during its prime, the forthcoming project was recorded at the Sunset Sound in Los Angeles in January 2022 and is a collection of six songs that were specifically selected through a collaboration between the band and Amazon Music. The first single, a soulful cover of “Papa Was a Rollin’ Stone” by The Temptations is out today.
The Black Crowes 1972 will be available exclusively on Amazon Music digitally on May 4. Vinyl and physical CD are also set for release everywhere on May 6 via the bands label Silver Arrow. Listen to “Papa Was A Rollin’ Stone” HERE.  Pre-Order 1972 HERE.
Lead singer of The Black Crowes, Chris Robinson said, “The year 1972 was a watershed moment, some of the greatest rock and roll songs ever made came out of that year. To get our band back together in the studio, it had to be a celebration of rock and roll. This record is about love and devotion to something that makes us feel good. We hope that it makes fans around the world feel the same.”
Global co-head of artist relations for Amazon Music, Stephen Brower said, “The Black Crowes have been celebrating their influences for their entire career, and a whole generation of fans (this one included) surely discovered Otis Redding’s “Hard To Handle” and Bob Marley’s “Time Will Tell” through their versions. To work with them to re-visit 1972, a truly magical year in music, was an absolute thrill. I can’t imagine another band having the skill and the swagger to take on these songs and pull it off so spectacularly.”
Join The Black Crowes on May 4 at 10:00 pm EST / 7:00 pm PST for a performance of the EP live from the historic Whiskey a Go-Go in Los Angeles via Amazon Music’s channel on Twitch. May 4 also marks the 50th anniversary of a renowned Little Feat performance at the famed venue in 1972.
1972 physical albums along with exclusive merchandise will be available for public purchase during the stream. Directed by Joseph Llanes, fans can also watch an exclusive, behind-scenes-look at the group in studio for the first time in over a decade HERE.
The Black Crowes: 1972 Track List:
The Black Crowes recently announced the dates for the second leg of their extended Shake Your Money Maker Tour following a successful 37 dates in 2021. The tour is set to kick off June 9 in Fort Lauderdale, FL with stops in major markets across North America. Fans can expect a two-hour set with lead-singer Chris Robinson and guitarist Rich Robinson on-stage alongside longtime bassist Sven Pipien performing their debut, multi-platinum album in its entirely, plus all the hits from the band. For the full routing and to purchase tickets for the summer 2022 tour, follow @theblackcrowes or visit www.TheBlackCrowes.com
Fans can hear The Black Crowes’ covers by simply asking “Alexa, play the Amazon Originals from The Black Crowes” in the Amazon Music app for iOS and Android, and on Alexa-enabled devices. In addition to the new track, Amazon Music listeners can access hundreds of Amazon Originals, featuring both emerging and established artists across numerous genres, available to stream and purchase only on Amazon Music.