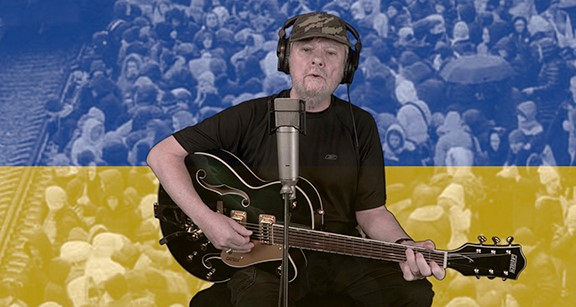 Multi-award-winning and Canadian Music Hall of Famer singer, guitarist, writer, and producer Myles Goodwyn is raising awareness and support “For Ukraine” with the release of his poignant new single — available now.

The leader of the multi-Platinum-selling rock band April Wine was inspired to pen the track after seeing the country’s suffering amidst attacks from Russia.

“Like the rest of the world, I’m witness to the devastation and suffering caused by the needless war in Ukraine,” Goodwyn shares. “This painfully sad and tragic situation inspired me to write this song with the hope that it might encourage people to help the citizens of Ukraine who are so desperately in need of our help.”

As distinctive and immediately recognizable as his songwriting skills are prolific, Goodwyn’s vocals and guitar are joined by Bruce Dixon on bass guitar and Scott Ferguson on drum programming. “For Ukraine” arrives ahead of Goodwyn’s forthcoming collection of all-new original songs, Long Pants, set for release this summer.

In 2016, he released his memoir named, Just Between You and Me, which became an instant seller on the Globe and Mail’s Non-Fiction List. His second book, Elvis and Tiger — this time a work of fiction — was published in 2018.