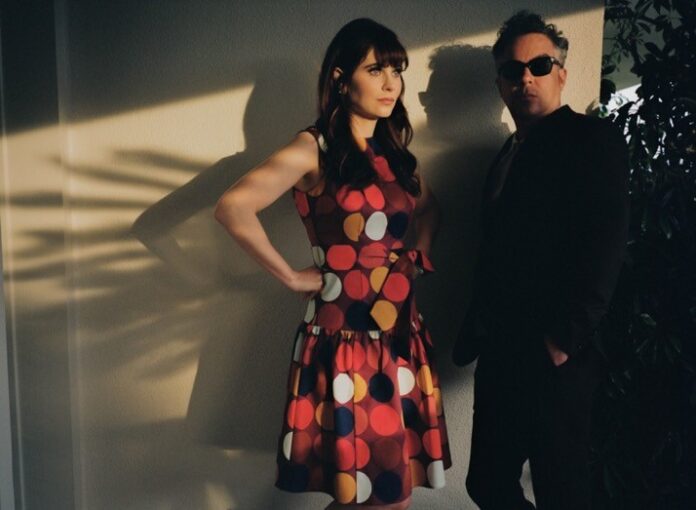 Ahead of the release of Zooey Deschanel (She) & M. Ward (Him)’s Melt Away: A Tribute to Brian Wilson, via Fantasy Records on July 22, the duo has premiered a charming rendition of Darlin’, the hit single from The Beach Boys’ 1967 album, Wild Honey.

She & Him’s seventh studio album is a loving, LP-length tribute to one of the greatest living American songwriters and singers – Brian Wilson. Melt Away: A Tribute to Brian Wilson finds Zooey Deschanel and M. Ward diving deep into the legendary artist’s extensive songbook, offering fascinating and delectable new spins on time-honoured classics and overlooked gems alike. These 14 covers are infused with the familiar magic that She & Him fans know and love, opening a new window into Wilson’s iconic catalog. Wilson even features on Do It Again with Zooey and M. Ward for the album. The band has enjoyed a friendship, and mutual appreciation, with Wilson over the years and She & Him was previously a guest vocalist on his 2015 album, No Pier Pressure.

“In the spring of 2020, we started a list of our favourite Brian songs — a very long list,” the duo explains. “We chose songs without any regard to their chart performance. The obscure ones hit us just as hard as the more popular songs — and all are ripe for re-imagining, re-interpreting, and re-inventing. Brian writes songs of beauty and loneliness and vulnerability better than anyone — and by sequencing them next to popular songs of confidence and love and fun, it creates a more complete picture of life on earth.”

Brian Wilson comments on Melt Away, “Zooey and Matt did such mind-blowing versions of our songs. The harmonies are beautiful and right on. I love this record!”

The album’s first single, Darlin’, comes replete with a QVC-inspired video directed by Lara Jean Gallagher. A perfect intro to the album, the Darlin’ clip finds the pair trading lead vocals while doing their best to sell nail polish to the masses.

Melt Away is Deschanel and Ward’s follow-up to 2016’s holiday album, Christmas Party, and it marks their second record of non-holiday covers since 2014’s Classics, which topped Billboard’s U.S. Folk Albums chart on release. It’s the latest display of remarkable talent from She & Him, who have wowed listeners for over 15 years with their gorgeous and warm indie-pop.

As Deschanel has maintained a successful acting career and Ward continued his own singular solo career as a producer and singer-songwriter, the duo continues to sound like the perfect match in the studio—with Zooey’s dramatic vocals excellently pairing with Matt’s textured, tuneful arrangements and production.

The band is on tour this year across North America, including a stop at the Vogue Theatre in Vancouver on June 18.