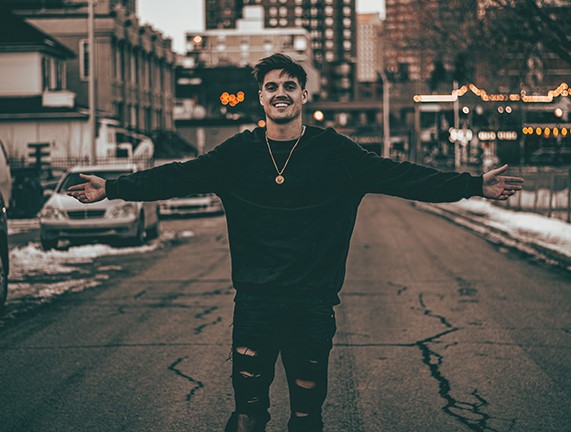 Canadian singer/songwriter Tate Irving electrifies with his signature pop-punk sound to tell a tale filled with hardship and personal growth with his catchy new single “She Said.”

“She Said” is an upbeat melody brimming with a charm that showcases Irving’s penchant for storytelling while demonstrating his life-long commitment to music through his abilities as a multi-instrumentalist. With the benefit of hindsight, Irving draws on his own experiences and setbacks to convey his uplifting message of self-acceptance in an authentic way.

Irving wrote “She Said” at 20-years-old, initially framing it as a series of life lessons passed down by Irving’s mother. As Irving says, “just the things she had taught me over the years and the importance of good values.” As time passed, the song was revised many times and transitioned from a slower acoustic piece into music that is much more up-tempo.

Irving reflected on the trials and tribulations of his 20s and the helpful advice he received to inspire a critical message of self-help and self-fulfillment.

“Well, you could start a revolution by the end of the day
Or build a white picket fence at the end of your lane
Post pictures on the internet for people you hate
Or work a 9-5 for a minimum wage
and maybe it’s just me and it just seems,
That this might be the next worse thing
So, you do you and I’ll do me”

Born in Sundre, Alberta, Irving’s passion for music formed at a young age when he began reading and playing piano sheet music at 5-years-old. His love for music eventually blossomed into an admiration for pop-punk bands such as Sum 41 and Blink-182. He started his first band in his teens called Muppet Nectar after picking the drums up from his uncle. Fast-forward years later to a chance encounter with a hostel owner in Indonesia where Irving was tasked to perform his first gig with original music; he consistently sold-out weekly shows to locals.

After returning to Canada, Irving met another pivotal figure in his music career, audio engineer Ryan Frampton. This collaborative relationship would lead to a publishing deal with Bedroom Records that continues to strengthen over time. With a suite of releases on the horizon, there is no doubt that the musical veracity of Tate Irving will be enjoyed for the foreseeable future.