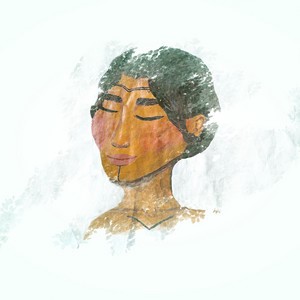 Juno-nominated Inuk singer-songwriter, Looee, just released her sixth album, Maani, and “Mumik&alirunnuk (Haali Jaali)” – pronounced “mu-mee-hla-LEE-ru-nu” – Looee’s first single leading up to the album release, is her first-ever song in English, as well as her first foray into the world of electronic dance music.

“Mumik&alirunnuk” means “to dance” in Inuktitut. The melody and text date back to the very early days of contact between Inuit and southern whalers, but the song has been supplemented with new lyrics and music, all of which were approved by Inuit knowledge keepers.

The song tells the true story of a young Inuk woman who meets a southern whaler named Jackson, on a mission to Nunavut. According to the original words, the two spend an entire night dancing together.

Originally a simple, repeating folk-tune, the song has evolved into a contemporary music triumph, with modern vocal production, synthesizers, and industry-standard mixing and mastering.

Production for this single and album took place in make-shift hotel room studios across Ottawa, ON. It was recorded and produced by Thor Simonsen (Kelly Fraser, Aasiva, Joey Nowyuk) and released with the Iqaluit-based record label, Hitmakerz, and distributed by CD Baby. This project was made possible with financial support from the Government of Nunavut.

Many of the tracks on Maani – meaning “right here, right now” in Inuktitut – are traditional Inuit songs that have been reimagined and transformed into contemporary, radio-friendly pop songs. The album includes Inuit classics such as “Inuksulualuk”, “Uppijuarlu Tulugarlu”, and the title track, “Maani”, as well as original works by Looee herself, inspired by her spoken-word poetry.

Looee is a prolific singer-songwriter, performing artist, accomplished writer, and seamstress. In addition, she is also the Executive Director of Qaggiavuut, a non-profit organization whose mission is to support the Nunavut artists and establish the territories first-ever Performing Arts Centre. In 2021, Looee was also nominated for a Juno Award for her work with Messiah Complex.

“Mumik&alirunnuk (Haali Jaali)” is now available on all streaming platforms at https://loom.ly/MmKJ5Hk. The full album, Maani, is available on September 23, 2022. Pre-save the album now at https://bit.ly/maanialbum.