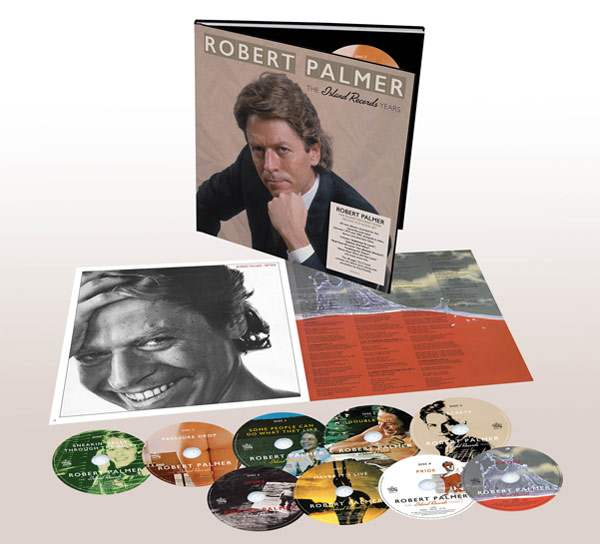 Robert Palmer was one of the greatest singer-songwriters of the late 20th Century. An artist and writer who sampled world-wide success, he never stopped being a music fan first and foremost, often racing to record something he’d just heard a snatch of on the radio or had caught in a club. His astute mixture of originals and well-selected covers gave him a song palette at times so eclectic that he became impossible to pigeonhole. In many respects, Palmer was the invisible man of pop. His close friends Talking Heads once recorded a track called Seen And Not Seen, the title of which sums up Palmer perfectly.

After spells with The Alan Bown! and Dada, and three albums with Vinegar Joe, Island Records signed Robert Palmer to a solo deal in 1973. This 109 track, 9 CD book set contains all nine albums that he recorded for Island Records, between 1974 and 1985, alongside b-sides, demos and alternate takes.

Aside from the worldwide hit “Addicted To Love”, the set also contains “Johnny And Mary”, “Bad Case Of Lovin’ You (Doctor Doctor)”, “Looking For Clues”, “Some Guys Have All The Luck” and many more hits, as well as collaborations with Gary Numan. The musicians include The Meters, Little Feat, and the Brecker Brothers and the producers include Tom Moulton and Chic’s Bernard Edwards.

The 28 page 12×12 booklet contains the album lyrics and credits, along with extensive annotation by Daryl Easlea. The set has been newly mastered by Phil Kinrade at AIR Mastering using digital sources provided by the Universal archive.

CD 1: Sneakin’ Sally Through the Alley
Sailin’ Shoes
Hey Julia
Sneakin’ Sally Through The Alley
Get Outside
Blackmail
How Much Fun
From A Whisper To A Scream
Through It All There’s You
Bonus tracks
Sneakin’ Sally Through The Alley [single mix]
Epidemic
Blackmail [alternate take]
Get Outside [alternate take]
CD 2: Pressure Drop
Give Me An Inch
Work To Make It Work
Back In My Arms
River Boat
Pressure Drop
Here With You Tonight
Trouble
Fine Time
Which Of Us Is The Fool
Bonus tracks
Willin’ [demo]
Hope We Never Wake [demo]
CD 3: Some People Can Do What They Like
One Last Look
Keep In Touch
Man Smart, Woman Smarter
Spanish Moon
Have Mercy
Gotta Get A Grip On You (Part II)
What Can You Bring Me
Hard Head
Off The Bone
Some People Can Do What They Like
CD 4: Double Fun
Every Kinda People
Best Of Both Worlds
Come Over
Where Can It Go?
Night People
Love Can Run Faster
You Overwhelm Me
You Really Got Me
You’re Gonna Get What’s Coming
CD 5: Secrets
Bad Case Of Loving You (Doctor, Doctor)
Too Good To Be True
Can We Still Be Friends?
In Walks Love Again
Mean Old World
Love Stop
Jealous
Under Suspicio
Woman You’re Wonderful
What’s It Take?
Remember To Remember
Bonus tracks

Bad Case Of Loving You (Doctor, Doctor) [12” Mix]
CD 6: Clues
Looking For Clues
Sulky Girl
Johnny And Mary
What Do You Care
I Dream Of Wires
Woke Up Laughing
Not A Second Time
Found You Now
Bonus tracks
Good Care Of You
Johnny And Mary [alternate take]
What Do You Care [alternate mix]
CD 7: Maybe It’s Live
Sneakin’ Sally Through The Alley [live]
What’s It Take? [live]
Best Of Both Worlds [live]
Every Kinda People [live]
Bad Case Of Loving You (Doctor, Doctor) [live]
Some Guys Have All The Luck
Style Kills
Si Chatouillieux
Maybe It’s You
What Do You Care [live]
CD 8: Pride
Pride
Deadline
Want You More
Dance For Me
You Are In My System
It’s Not Difficult
Say You Will
You Can Have It (Take My Heart)
What You Waiting For
The Silver Gun
Bonus tracks
You Are In My System [12” remix]
Ain’t It Funky [Si Chatouillieux – extended version]
Pride [12” mix]
Parade Of The Obliterators
You Can Have It [12” mix]
You Are In My System [instrumental mix]
Deadline [12” mix]

CD 9: Riptide
Riptide
Hyperactive
Addicted To Love
Trick Bag
Get It Through Your Heart
I Didn’t Mean To Turn You On
Flesh Wound
Discipline Of Love
Riptide (Reprise)
Bonus tracks
Discipline Of Love [12” mix]
Riptide Medley
Sweet Lies [12” mix]
Let’s Fall In Love
I Didn’t Mean To Turn You On [12” mix]
No Not Much [live on The Tube]
Trick Bag [live on The Tube]
Les Planches