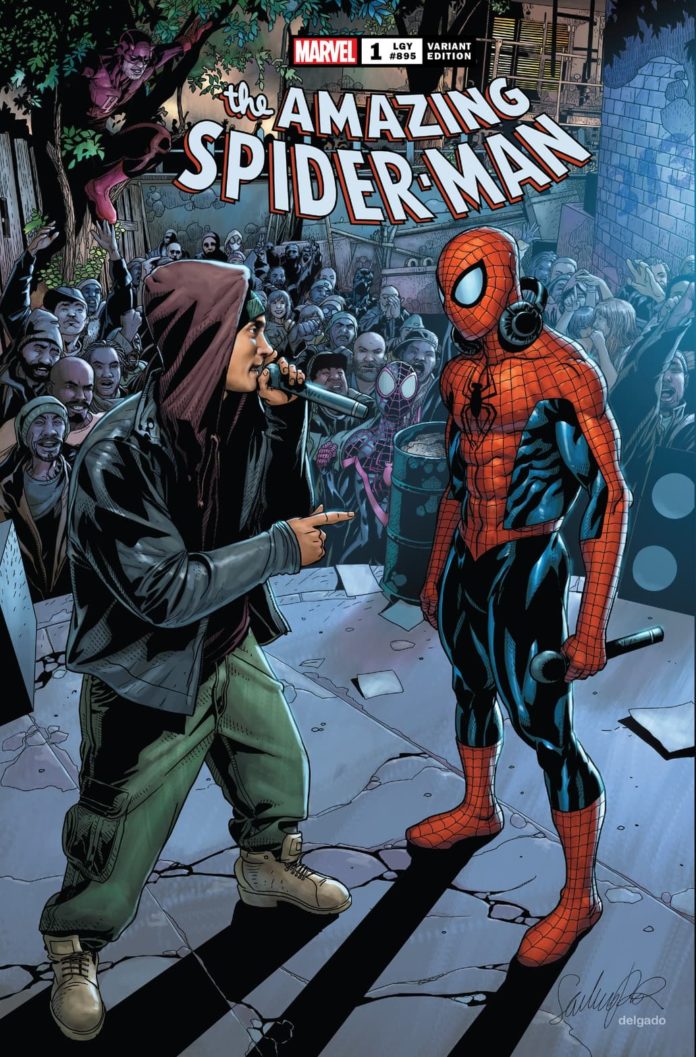 hustl. announced today that Hip Hop Icon Eminem and Marvel’s friendly neighborhood Spider-Man will partake in an epic rap battle on a limited-edition variant cover to celebrate the previous release of THE AMAZING SPIDER MAN #1, which debuted in stores this past April.

This limited edition 5,000 print run features art from Salvador Larroca and will be available for purchase today at Eminem.com.

An additional 1,000 limited print run of the spotlight version of the original variant comic cover from hustl. will be available for purchase Tuesday, November 29th at TheHaul.com.

Critically acclaimed as one of the most influential artists of all time, Eminem takes the stage for his latest appearance on a Marvel comic cover. Throughout his illustrious career, Eminem has won 15 Grammy Awards, eight American Music Awards, 17 Billboard Music Awards, an Academy Award, and an MTV Europe Music Global Icon Award. Amongst other incredible accolades, Eminem has also been featured on Rolling Stone’s list of 100 Greatest Artists of All Time, and 100 Greatest Songwriters of All Time.

“I’ve always been a huge Spider-Man fan since I was a kid- he’s definitely in my top 5…. so being on a cover battling Spider-Man is such a thrill and an honor,” said Eminem.

THE AMAZING SPIDER-MAN #1 marked the launch of a brand new series by Emmy and Annie Award-winning writer Zeb Wells (Robot Chicken) and one of Marvel’s most famous Spider-Man artists John Romita Jr. In this all-new ongoing series, Spider-Man is on the outs with the Fantastic Four, Avengers and Aunt May! No one wants to see Spider-Man- except for Doctor Octopus. Ock’s on Spider-Man’s tail and the Master Planner has something truly terrible planned for when he gets in tentacles on the Web-Slinger. While Eminem is not in the story or series, he will appear on this special variant cover as a limited edition collectible to celebrate Spider-Man’s 60th Anniversary. Eminem has been featured on previous Marvel covers including Punisher and Iron Man, and wrote the song “Venom” for the film Venom.

“It’s truly an honor to be able to bring Eminem and Spider-Man to fans slinging raps on this official Marvel variant cover. There is no doubt that fans lucky enough to find themselves holding one of these will possess a highly sought-after collectible,” said Keri Harris, COO hustl.