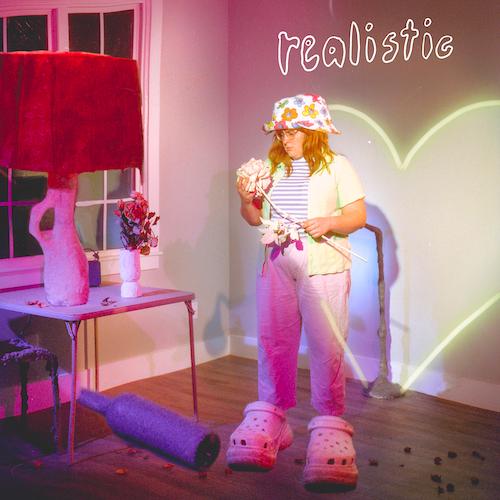 “i’ve never understood society’s view of love,” corook says. “movies and songs usually portray love as this exaggerated, self-sacrificing, desperate act that ultimately leaves me feeling underwhelmed and misrepresented. it’s unrealistic. meanwhile my generation was raised by boomers and half of them got divorced. this song is my protest of those expectations and the fears that come with that kind of honesty. it’s a commitment to finding true love in the truest way possible. maybe i’m a skeptic or maybe i’m realistic.”

“realistic” follows corook’s acclaimed ode to realizing your self-worth, “smoothie,” available at all DSPs and streaming services HERE. The track was met by applause from Consequence, which wrote, “The idea of self-image has been discussed at length in music, particular in the last decade, but you’d be hard-pressed to find another song that uses the imagery of blended fruit as the vehicle of choice for the subject. Somehow, corook is the kind of voice that makes it all work – everything sung here feels believable, raw, and true.” “(‘smoothie’) is a deliciously fun pop-rock genre blend,” declared Billboard. “A verified banger.”

corook – who recently travelled to Mexico City for a performance at Mexico’s Festival Corona Capital – has spent much of this past year on the road, including a US tour alongside NYC-based piano pop/rock trio Jukebox the Ghost as well as her debut festival performance at Bonnaroo Music & Arts Festival, featured in Rolling Stone’s Bonnaroo 2022 wrap-up. Earlier this year, she made her first-ever North American live run alongside K.Flay and opened for X Ambassadors at “A Night Benefitting Reproductive Rights” at The Troubadour. New dates will be announced soon. For updates, please visit www.corook.com.