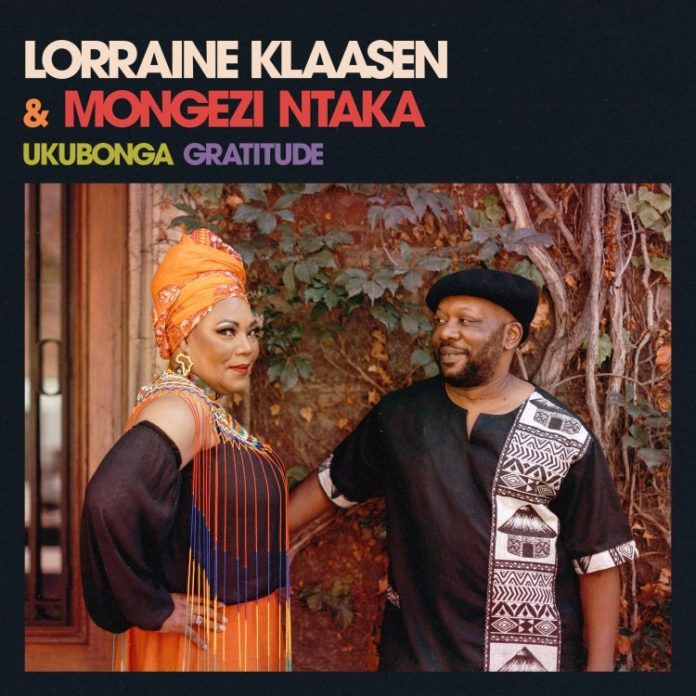 Ukubonga [Gratitude], the new recording from South African singer Lorraine Klaasen and South African guitarist, composer, arranger, musical director and producer Mongezi Ntaka is a collection of songs from the Southern Africa’s Township music songbook and features songs written by some of Southern Africa’s celebrated singers and composers. Lorraine & Mongezi decided to show gratitude to the dedicated artists who endured and survived some of the most brutal and humiliating experiences a human can experience while pursuing their musical careers to support their families.

Township music is the soundtrack of South Africa and much of the Southern African region. This sound comes from a people who have endured and triumphed over very difficult times. Township music has preserved a lot of indigenous cultures of Africa through its flexibility in adapting to new technologies and has also influenced political and social change. Lorraine & Mongezi had professional association, personal friendships and family ties with some of the artists and composers whose songs are performed on Ukubonga [Gratitude], .

At the heart of this album are messages of African romantic courtships, wedding songs, social & political commentary, consciousness and cultural pride that is full of the elder’s wisdom. The inspiration for this album came through Lorraine & Mongezi’s desire to increase awareness of a musical culture that is as good as any other in the world. Sadly, almost all the artists whose songs are included on this project have passed on and have left this incredible body of work that should still remind the children of African the importance Ukubonga [Gratitude].

Lorraine tells the story behind the creation of “Ukubonga [Gratitude]”:

“As an artist I never realized how important music is in my life and how my music has impacted my fans until the Coronavirus pandemic arrived in the beginning of 2020. During this period, I reflected on the direction I should take in my music career and suddenly an idea to collaborate with my dear friend Mongezi Ntaka came along. Over the past decade or so, I have been performing a duo live show of just an acoustic guitar and voice with Mongezi Ntaka and my record company suggested that we record that show in the studio in order to share that experience with more listeners.

Mongezi suggested that we go into the South African songbook and select some of the most memorable songs in the Township music genre. Mongezi and I decided on ‘Ukubonga’ [Gratitude] as the title of the album in appreciation of the work that all the artists who created the music genre we now call South African Township music. This album also includes works by some of the women I dearly respect and adore. My musical influences range from groups like the Mahotella Queens, Dark City Sisters to artists like Dorothy Masuka, Margaret M’cingana (Singana), my mom Thandi Klaasen and Miriam Makeba. On this album, I am using several Township music vocal styles including those by Busi Mhlongo who is one of the greatest influences in my vocal style.

Thanks to my recording company Justin Time for their support and having an open mind when listening to my ideas. I am also very grateful to my entire family for their unconditional love and support. Most of all I thank my God, Jehovah for the wonderful gift of music. I hope my music brings joy in your life.”

In order to maintain the integrity of the music, Lorraine & Mongezi performed the music live in the studio and kept most of the imperfections in the performance. Every song recorded on this album was recording in one take and then vocal and acoustic guitar overdubs were done immediately after every song was recorded. This was done to keep the tradition in which the original recordings were captured. It is a great pleasure, honor and appreciation for Lorraine Klaasen and Mongezi Ntaka to share this timeless music with the rest of the world.