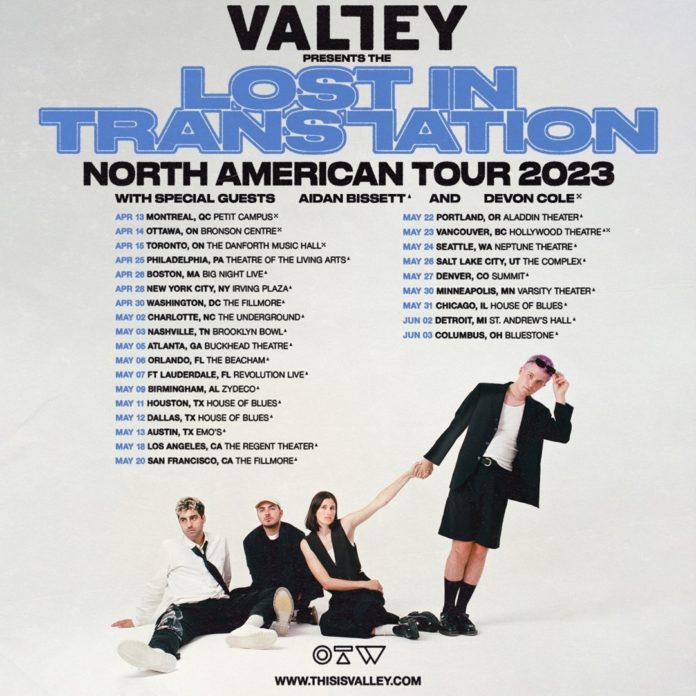 Today, JUNO Award nominated alternative-pop band Valley announces a 27-date North American headlining tour in celebration of their sophomore album Lost In Translation, set to be released June 23 through Capitol Records / Universal Music Canada, the country’s leading music company. Produced by Live Nation and OnesToWatch, the ‘Lost In Translation’ tour will kick off on April 13 in Montreal then weaving through North America and wrapping up in Columbus, Ohio in June just ahead of album release. Valley are joined by fellow Canadian singer-songwriter Devon Cole and LA-based, Capitol Records labelmate Aidan Bissett, see tour dates and details below.

The ’Lost In Translation’ tour announcement arrives after the band share news of their second album Lost In Translation which arrived with the release of their lead single “Throwback Tears,” to kick off what is bound to be a monumental 2023 for Valley. Describing the track, lead vocalist Rob Laska says, “leading with ‘Throwback Tears’ as the first single always felt right. It has cheeky new year, new me energy. Sad yet playful, which we always gravitate to with our production and lyrics. It very much feels like the door swinging open to a breakbeat and us asking you to step into the new sonic world we’ve created around Lost In Translation,” describes lead vocalist Rob Laska.

Lost In Translation follows Valley’s debut album, MAYBE released in 2019. The upcoming full-length album captures the band’s evolution over the past four years both sonically and emotionally as a group of friends grow through the unpredictability of navigating creative careers. Laska explains further, “MAYBE will always be our teenage diary, our coming-of-age story, our first love and first record. Lost In Translation is those same best friends navigating their mid 20s and questioning ‘what now?…what really matters to us?’ and what might’ve been lost along the way. Between MAYBE and now, we’ve done more soul searching together than ever. We’ve travelled the world, we’ve accomplished a lot we never thought was possible. We’ve followed every single path to get nowhere and everywhere. It’s a very caught in a thought and seeking album. It poses more questions than answers. It’s honest, it’s confusing, it’s pop, it’s nostalgic, it’s black and white, its colourful, it’s unpredictable, it’s simple, it’s Valley, Lost In Translation.”

Valley capped off 2022 with the special release of a live EP, Live In Seoul. Last year, Valley travelled to South Korea to perform at Slow Life, Slow Live Festival in Seoul, their first show outside of North America, alongside LANY, Jonas Blue, Tones and I, LAUV and more. The four track EP was recorded live off the stage of the festival where the band performed to over 15,000 fans that sang along to every word despite English not being their first language. Korea continues to be a key market for Valley, garnering over 100 million streams in that territory alone. From a warm welcome at the airport to interviews with some of Korea’s most impactful media, Valley was ecstatic to have the opportunity to connect with fans who have found their music from worlds away and the Live In Seoul EP captures the energy of that first trip. Listen to Live In Seoul for a preview of the ‘Lost In Translation’ tour here.