When siblings Richard and Karen Carpenter released their debut album in 1969, nobody could predict the enormous success they would achieve throughout the next decade. With Karen’s angelic voice and Richard’s stellar arrangements, The Carpenters became a musical force to be reckoned with. Their popularity spread from the U.S. to Europe, Japan, Australia and beyond. Even after 25 years after Karen’s death, they are one of the most recognizable pop duos in music history, and deservedly so.

Their version of The Beatles’ “Ticket To Ride” peaked at number 54 on the Billboard Hot 100 during a 12 week stay, and reached number 19 on the Adult Contemporary chart. At the time of its initial release in 1969 under the album title Offering, (with a completely different cover photo) it was a commercial failure and the record label only released this cover as a single. After the Carpenters’ subsequent breakthrough, however, the album was reissued internationally under the name Ticket to Ride and sold better – but not much. 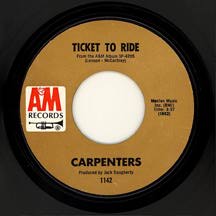