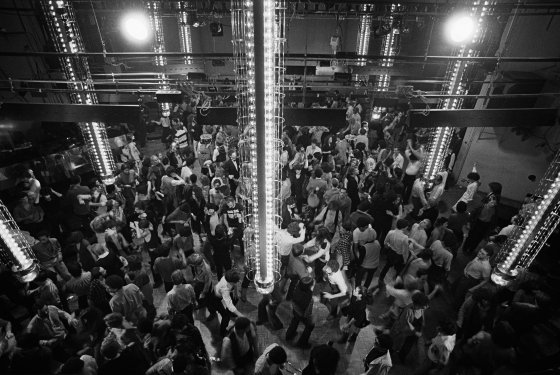 The last incarnation of our black rock band was called the Big Apple Band. We were R&B, fusion, jazz, rock-and-roll. One of the guys I had gone to school with had a major hit record called “A Fifth of Beethoven”—Walter Murphy and the Big Apple Band. People thought that was us, so we changed our name to Chic. I wrote our very first song for this new entity: “Everybody Dance.” We premiered it at a club called the Night Owl Cafe. From this one club, the song blew up, and the whole scene would go there just to hear this song.

That song and “Dance, Dance, Dance (Yowsah, Yowsah, Yowsah)” became big records in the underground scene and they were popular on the radio. Grace Jones, who was a goddess in those days in the club scene, expressed interest in having me and Bernard Edwards write and produce her next album. This was huge! We only had one record under our belts, and we get a call from Grace Jones? But we had never spoken to her, so on the phone she had this very bizarre vocal affectation. We thought she was putting on this voice for us as part of her code message on how to get into Studio 54. So she says, “Tell them you’re personal friends of Miss Grace Jones.” [Said in a faux-Austrian accent.] We knock on the door and say, “We are personal friendzzz of Meees Graaaysss Jones,” and the guy slams the door in our faces and tells us to fuck off. And we say, “No, no, no. Seriously,” and we try and get it better. “Weeee’re personal friendzzz of Meeeesss Graaaaysss Jones.” We sound like Bela Lugosi. He slammed the door in our faces again. So we went to my apartment and started jamming on a groove, like “Aww, fuck off! Fuck Studio 54!” And it sounded great. Then Bernard, in his infinite wisdom, said, “My man, you know this shit is happenin’, right?” And I was like, “How are we gonna get ‘fuck off’ on the radio?” So we changed it to “Freak Off.” And Mr. Hippie, the acid head in me, said, “You know, like how about we call it ‘Freak Out’?” Bernard was like, “What does that mean?” And I was like, “You know, when you drop a tab of acid, man, and things go bad. Or, how about, you know when you go to a club and you’re freakin’ out on the dance floor.” And Bernard said, “My kids are doing that new dance called the ‘Freak.’ ”

So we took this negative experience and turned it into a positive one, and we talked about being in Studio 54 dancing this new dance. We took Chubby Checker’s “The Twist” and Joey D and the Starliters’ “ Peppermint Twist” and made it be about the “Freak.” To make it sound like it was ours, we called it “Le Freak.” But we didn’t tell people how to do the dance because we didn’t really know how to do it. It became better to speak of it in this euphoric way, and talk about the experience of doing it. We say, “Have you heard about the new dance craze.” We assume you haven’t. “We’ll show you the way.” But we don’t! The dance never became “the Twist” or even “the Hustle.” But the song is a triple-platinum single. And when we were on American Bandstand, Dick Clark introduced us in a really wonderful way. He said, “This is the biggest song by a band nobody knows about a dance that nobody knows how to do. Ladies and gentlemen, Chic! ‘Le Freak’!” It was so right on the money.