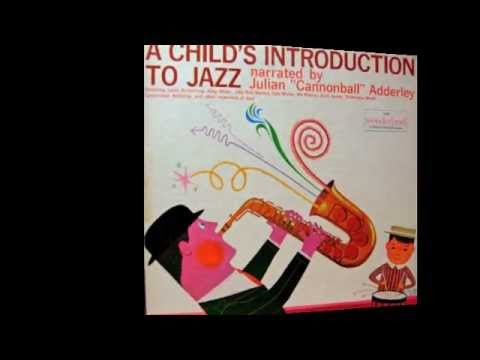 Part of a larger series of educational albums for children, this 12-inch LP offered an “easy-going, conversational discussion of the highlights of the jazz story,” highlighting the “major styles and great performers” that began in New Orleans and spread beyond. Included on the album are some legendary jazz figures — Louis Armstrong, Fats Waller, Jelly Roll Morton, Duke Ellington, Coleman Hawkins, Sidney Bechet, Thelonious Monk, and, of course, Cannonball himself. The album, A Child’s Introduction to Jazz, has long been out of circulation.

The team behind this record, Bill Grauer Productions, writes, “This is one of a series of 12-inch long-play records designed to take children into a delightful and exciting world of entertainment. They can learn wonderful things from these albums, but it never has to seem like learning. That’s part of the magic – for on these recorded tours into our “Wonderland” your children’s guides are celebrated performers, including some of the most famous and most sparkling names in the entertainment world: actors, singers and musicians whose skill and charm are well known to both children and grownups.

The story of jazz is the story of an exciting and truly American art form – a music bursting with the vitality of American life. Characterized by a regular beat and a direct emotional appeal, jazz can-if properly presented-have deep fascination and rich meaning for young children from the time they first begin to show an interest in music.

To insure such proper presentation, we have enlisted the aid of one of today’s most famous jazz musicians – Julian “Cannonball” Adderley, who is also noted as a highly articulate and well-informed writer in this field. His commentary is neither an over-formal history nor a technical ‘music lesson.’ Instead, it is an easy-going, conversational discussion of the highlights of the jazz story in terms of the major styles and great performers from New Orleans Up to the present-illustrated at every step of the way by excerpts from the celebrated Riverside catalogue.”

One thing that you should remember in listening to this album, and to any jazz you hear anywhere, is that jazz is very much a matter of people expressing their feelings, their thoughts, their ideas about life, and doing it of course through their music.