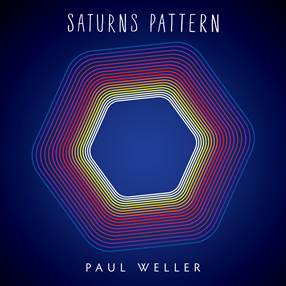 Continuing his ever soaring creative peak, Paul Weller releases his 12th studio album “Saturns Pattern” on May 11th on his new label Parlophone.

The follow up to 2012’s No. 1 album “Sonik Kicks”, Paul continues to push the boundaries with another kaleidoscopic tour de force delivered with a verve and ambition to shame his contemporaries as he continues to adapt and evolve to stay one step ahead of the pack.

Written and recorded at de facto HQ, Black Barn Studios in Surrey, “Saturns Pattern” was produced by Jan “Stan” Kybert and Paul himself.

Musicians on the album feature some of the touring band faithful: Steve Cradock, Andy Crofts, Ben Gordelier and Steve Pilgrim plus an illustrious roll-call of guest musicians who include The Strypes’ Josh McClorey and Paul’s old mate from Woking Steve Brookes who was guitarist in the original line-up of The Jam. Paul also brought in members of his favourite new band Syd Arthur to add to the proceedings.

Passion, progression, languid grooves and, as ever, spine-tingling rock’n’roll – Paul Weller has, yet again, delivered another masterpiece.

“Saturns Pattern” will be available to download from the usual places and is also released on the following physical formats:

“White Sky” is available as an ‘Instant Grat’ track with pre-orders of the Deluxe Digital formats (where available). Watch the video to “White Sky” here:

Following his sold out 14-date UK tour in March, Paul has just announced one of his biggest ever arena tours with dates at the following venues: