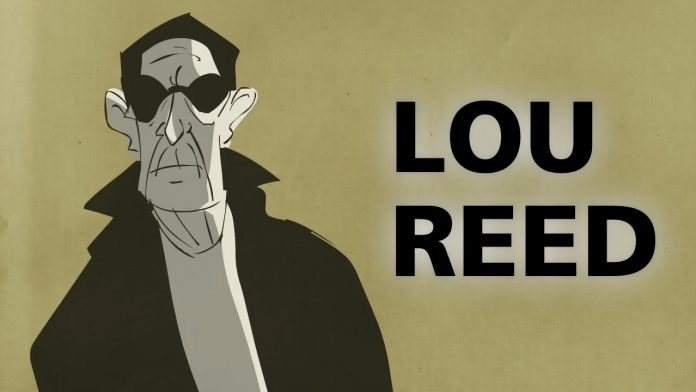 “I write a song called ‘Heroin’, you would have thought that I murdered the Pope or something.”
– Lou Reed on March 20, 1987, as told to Joe Smith

Lou Reed. Lou Reed. Lou Reed. Here we bring you a rarely heard interview Lou recored in 1987. It’s vintage Lou. Salty and sweet. Earnest and cocky. Grouchy and kind of endearing. Reed (and his legendary band The Velvet Underground) were those musicians who never got the extensive accolades or awards–nor the riches many of their contemporaries found. Yet he never seemed to waver in his search for the perfect sound and his quest “to elevate the rock and roll song and take it where it hadn’t been taken before.” Here we present some interview outtakes that give a taste for this iconic American musician. Lou Reed died of liver disease on October 27, 2013. He was 71.

In this animated film Lou Reed talks about chasing off nosy college kids on his porch with his shotgun, how he dreamed about writing the great American novel while at Syracuse University, “how savage the reaction against” the Velvet Underground was, the intention of taking books and putting them into songs, writing rock and roll you could grow old with, not thinking The Doors or the Beatles were up to the level of his band, and how he hoped to elevate the rock and roll song to where it hadn’t been before.