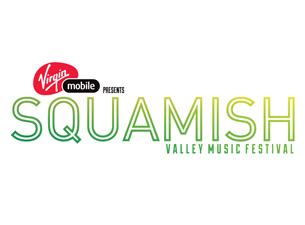 Over 70 artists from across the globe will grace the four stages of the Virgin Mobile Presents Squamish Valley Music Festival this summer, led by the star-studded trio of headliners, Mumford & Sons, Drake, and Sam Smith. Back for its sixth year, the Festival, produced by Live Nation Canada in partnership with festival creators brand.LIVE Management Group, takes place at the Logger Sports Grounds and Centennial Fields in Squamish, British Columbia, August 7, 8 & 9, 2015.

ARTISTS SCHEDULED TO PERFORM INCLUDE:

In its full 2015 lineup release today, the Festival announced an eclectic roster of artists from all genres, including internationally renowned musicians, emerging local talent, and legendary electronic dance music (EDM) artists who will once again be featured in the Blueprint Arena presented by Bacardi, curated by Blueprint Events.

“We believe today’s festival-goer is looking for diversity in the line-up but are also looking to discover new artists,” says Erik Hoffman, Live Nation Canada Senior Vice-President of Talent. “This year’s programming embodies this spirit. Artists accessible enough for all music fans but cutting edge enough for the most discernible music critic.”

More than 105,000 music fans attended the Festival last year, making it the largest outdoor music event in Western Canada. It generated an estimated economic impact of over $32 million over the four days of the festival.

“The 2014 Festival saw unprecedented growth and success across all areas, including security, transportation, camping and medical services – all with tremendous support from the Squamish community,” says Executive Producer of the Festival and Senior Vice-President of brand.LIVE, Paul Runnals. “We’re building off that momentum again this year with another incredible lineup, continued improvements being made to Festival infrastructure and logistics based on feedback from our festivalgoers.”

“We’re proud to be the presenting sponsor of this amazing Festival for the fourth year in a row,” says Kevin Campbell, Director of Brand Experience, Virgin Mobile Canada. “We love offering Virgin Mobile Members VIP experiences at every turn and we’re kicking off this Festival by offering our Members an exclusive presale starting Monday, February 23.”

This year, the festival is proud to have Spotify Canada onboard to enhance the fan experience by providing unique playlists of festival performers online, on their phones and through the festival app. Check out the lineup playlist here: SVMF

The Festival will again be held at Centennial Fields and will be expanding its use of the RFID (Radio Frequency Identification) enabled wristband system that was implemented last year to incorporate all food and merchandise vendors, including those at the four offsite campgrounds.