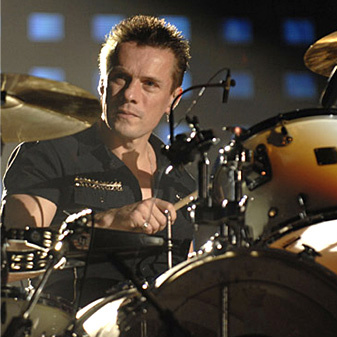 The April 25, 2011 issue of the New Yorker contained a fascinating article about David Eagleman, the celebrated neuroscientist and director of the Laboratory for Perception and Action at Baylor College of Medicine in Houston. A number of professional drummers, invited by Brian Eno and from some of the biggest bands in the world, allowed Eagleman to observe them. They were outfitted with EEG units on their heads in special workstations for the data collection. The tests were conducted on a laptop. A software program asked the drummers to do four things: Keep a steady beat; compare the length of two tones; synchronize a beat to an image and compare different rhythms to one another.

“I was working with Larry Mullen, Jr., on one of the U2 albums,” Eno told me. “ ‘All That You Don’t Leave Behind,’ or whatever it’s called.” Mullen was playing drums over a recording of the band and a click track—a computer-generated beat that was meant to keep all the overdubbed parts in synch. In this case, however, Mullen thought that the click track was slightly off: it was a fraction of a beat behind the rest of the band. “I said, ‘No, that can’t be so, Larry,’ ” Eno recalled. “ ‘We’ve all worked to that track, so it must be right.’ But he said, ‘Sorry, I just can’t play to it.’ ”

Eno eventually adjusted the click to Mullen’s satisfaction, but he was just humoring him. It was only later, after the drummer had left, that Eno checked the original track again and realized that Mullen was right: the click was off by six milliseconds. “The thing is,” Eno told me, “when we were adjusting it I once had it two milliseconds to the wrong side of the beat, and he said, ‘No, you’ve got to come back a bit.’ Which I think is absolutely staggering.”