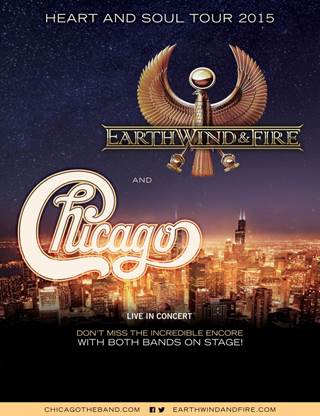 “One of the most exciting things about the show is when both bands perform at the end of the concert,” Lee Loughnane of Chicago said. “Having these 21 very talented musicians playing our greatest hits together puts the excitement level at a fever pitch! From the Heart of Chicago and the Soul of Earth, Wind & Fire, it is an unforgettable experience.”

Tickets for the tour go on sale starting Friday, March 13 at 9  a.m. in select cities on www.livenation.com. Please see below for full details and on sale information.

With more than 200 million albums sold and 20 GRAMMY® nominations between them, the tour will provide unparalleled entertainment from two of America’s most legendary musical groups. Billboard hails that Chicago is one of “the most successful American rock band[s] of all time, in terms of both albums and singles” and “been able to fill arenas with satisfied fans” with music that has endured throughout time while Rolling Stone has described Earth, Wind & Fire as “a funk-fusion powerhouse that changed the sound and history of popular music.”

Earth, Wind & Fire is one of the most innovative and influential contemporary music forces of the 20th century. With a signature sound beyond category and a groove as deep as the soul of the planet the band has impacted the history of music and pop culture for over four decades. EWF has sold over 90 million recordings earning them a solid spot as one of the all-time bestselling music artists. Rolling Stone and VH1 ranked Earth, Wind & Fire on their lists of the Greatest Artists of Rock & Roll. Originating from Chicago in 1969, EWF’s career achievements include an induction into Rock and Roll Hall of Fame (2000), a star on the Hollywood Walk of Fame (1995), eight Grammy Awards and four American Music Awards. Earth, Wind & Fire’s music has influenced, been covered or sampled by top artists including, Prince, Alicia Keys, Beyonce, Jay Z, Usher, Bruno Mars, P. Diddy, wil .i.am and more. Founded by music genius Maurice White; EWF’s co-founders Philip Bailey, Verdine White and Ralph Johnson continues to tour and perform to sold-out audiences around the world.

Hailed as one of the “most important bands in music since the dawn of the rock and roll era” by former President Bill Clinton, the legendary rock and roll band with horns, Chicago, came in at #13, the highest charting American band in Billboard Magazine’s list of Top 100 artists of all time. And Chicago is the first American rock band to chart Top 40 albums in six decades. Chicago’s album, Chicago Transit Authority, was inducted into the GRAMMY Hall Of Fame in 2014. Lifetime achievements include a Grammy Award, multiple American Music Awards, a star on the Hollywood Walk of Fame, a Chicago street dedicated in their honor, and keys to and proclamations from an impressive list of US cities. Record sales top the 100,000,000 mark, and include 21 Top 10 singles, 5 consecutive Number One albums, 11 Number One singles and 5 Gold singles. An incredible 25 of their 36 albums have been certified platinum, and the band has a total of 47 gold and platinum awards. Chicago have toured every year since the beginning – they’ve never missed a year. The band is now in their 48th consecutive year of touring, and continue to be true ambassadors for their beloved hometown, carrying the city’s name with pride and dignity around the world.