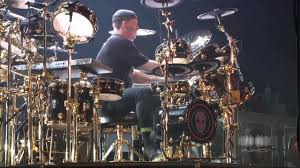 Rush drummer Neil Peart says he’s in two minds about touring again as he doesn’t want to leave his family for an extended period of time. Nobody’s said it officially yet, but it’s a possibility this current tour might just be Rush’s last. His quote is one sentiment I’ve heard from many artists – both young and vets of the road – family will come first, last and always.

“It’s a true dilemma – there’s no right answer. People say to me, ‘Are you still excited when you go on tour?’ Should I be excited about leaving my family? No, and no one should. It’s as simple as that: if you put aside the fantasy of it, it is what it is and has to be done. And that’s fine and I pour my entire energy and enthusiasm into it, but of course, I’m of two minds about the whole idea.”

And he says the thought of leaving his five-year-old daughter Olivia leaves him with feelings of guilt.

He continues: “I’ve been doing this for 40 years – I know how to compartmentalise, and I can stand missing her, but I can’t stand her missing me and it’s painful and impossible to understand for her. How can a small child process that? And there’s the guilt that comes with that – you fell guilty about it, of course. I’m causing pain.”