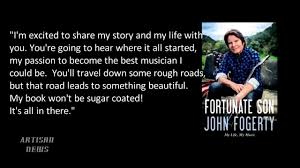 Coming October 6, 2015, from Little, Brown and Company, is the long-anticipated memoir by JOHN FOGERTY, titled FORTUNATE SON: My Life, My Music. With JOHN FOGERTY writing hit after hit, Creedence Clearwater Revival burst on the music scene with an energy so bright, his songs outsold The Beatles in 1969. Then, just as quickly, that CCR fire burned out in a series of internal band struggles that left the music world without the influence of one of its brightest stars for over two decades.

“I’m excited to share my story and my life with you,” said Fogerty. “You’re going to hear where it all started, my passion to become the best musician I could be. You’ll travel down some rough roads, but that road leads to something beautiful. My book won’t be sugar coated! It’s all in there.”

Creedence Clearwater Revival is one of the most important and beloved bands in the history of Rock ‘n Roll, and the story that JOHN FOGERTY’s memoir tells will keep music lovers and avid readers captivated. FOGERTY wrote, sang, and produced the iconic classics “Born on the Bayou,” “Proud Mary,” “Bad Moon Rising,” and so many more. Now he reveals how he brought CCR to the top of the charts and how, one year later, CCR was falling apart. Their amazing talents and culturally-prophetic songs, however, have endured for decades despite the series of personal and legal issues. FORTUNATE SON takes readers from FOGERTY’s Northern California roots, through Creedence’s success, his retreat from music and public life, to FOGERTY’s hard-won revival as a solo artist who finally, through it all, found love.