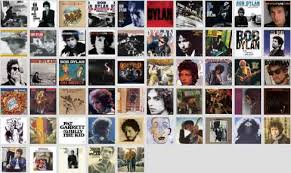 Early on, before rock ’n’ roll, I listened to big band music: Harry James, Russ Columbo, Glenn Miller. But up north, at night, you could find these radio stations that played pre-rock ’n’ roll things — country blues. You could hear Jimmy Reed.

Then there was a station out of Chicago, played all hillbilly stuff. We also heard the Grand Ole Opry. I heard Hank Williams way early, when he was still alive. One night, I remember listening to the Staple Singers, “Uncloudy Day.” And it was the most mysterious thing I’d ever heard. It was like the fog rolling in. What was that? How do you make that? It just went through me.

I managed to get an LP, and I’m like, “Man!” I looked at the cover, and I knew who Mavis was without having to be told. She looked to be about the same age as me. Her singing just knocked me out.  This was before folk music had ever entered my life. I was still an aspiring rock ’n’ roller. The descendant, if you will, of the first generation of guys who played rock ’n’ roll —  who were thrown down. Buddy Holly, Little Richard, Chuck Berry, Carl Perkins, Gene Vincent, Jerry Lee Lewis. They played this type of music that was black and white. Extremely incendiary. Your clothes could catch fire.

When I first heard Chuck Berry, I didn’t consider that he was black. I thought he was a white hillbilly. Little did I know, he was a great poet, too. And there must have been some elitist power that had to get rid of all these guys, to strike down rock ’n’ roll for what it was and what it represented — not least of all it being a black-and-white thing.  – Bob Dylan, AARP magazine