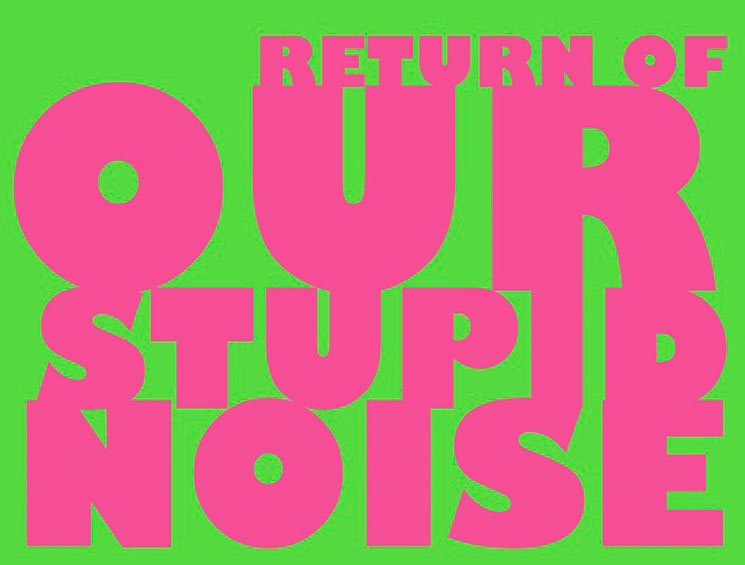 In celebration of their 20th anniversary, Squirtgun Records (distributed by eOne Music Canada) presents Return Of Our Stupid Noise, a raucous roll-call of Squirtgun co-conspirators both new and old. Out May 5th, the record is the result is a righteous re-affirmation of the newly reloaded Toronto label’s distinctive sound and aesthetic, as well as a scintillating hint of glories to come in the fantastic 21st century.

In the youth-obsessed world of Rock N Roll, Squirtgun Records founder Lee Maslin might very well be considered a dinosaur, a notion he finds amusing.

‘I’m not extinct yet!’ he protests, feeling his pulse. ‘More like a wooly mammoth.’ He offers instead. ‘Frozen in time. They thawed me out!’

After laying dormant for over a decade, the label he began in 1995 has been resurrected to release a spate of recordings marking its 20th anniversary. The first of which, Return Of Our Stupid Noise, completes a trilogy of compilations whose legacy of uniting Canada’s roving indie bands onto one disc has survived the intervening years. This new release matches established heroes like By Divine Right, Radioblaster, Scratching Post, Brendan Canning and Carole Pope with newer artists culled from the indie rock wilderness, such as Montreal’s Dany Laj & The Looks, St. John, New Brunswick’s Little You, Little Me, Alton, Ontario’s Ryan Masters and Guelph, Ontario’s The Skeletones Four.

When Maslin put Squirtgun on ice in 2000, after releasing an EP by Plastic Bag, it seemed like a timely opportunity to take stock, following five fruitful years, which yielded a staggering twenty-five releases from artists like Hayden and Elevator To Hell.

‘Things were changing. Bands were breaking up. We sold out of our singles collection within a week and I had just done a deal with Nettwerk, which put the label in the black.’ Maslin recalls, referring to a 1998 arrangement that saw More Of Our Stupid Noise and By Divine Right’s classic ‘All Hail Dischordia’ rereleased to a wider audience by Nettwerk Records. ‘It seemed like a good place to relax in the shade for a minute.’

With the arrival of kids & a death in the family, that minute stretched on to more than a decade. Maslin doesn’t seem phased. ‘Ten years go by pretty quick.’ He laughs. ‘I’m ready to pick up the gauntlet again.’

When asked why he chose to return to an industry very different than the one he left behind in 2000, Maslin grins & takes a sip of Coke Zero.

‘The fight for rock has not yet been won. There are a ton of amazing records out there that people need to hear. Rock N Roll hasn’t languished, it’s gotten stronger and more interesting than ever. I’m thrilled to be working with our artists and doing what I can to promote this music. Rock is our national birthright!’

When asked to elaborate on the name of his long-lived compilation series, Maslin thinks for a moment.

‘It was kind of off-handedly suggested by a friend of mine at the time, but seemed to fit. It’s unpretentious in a way that I like and it’s inclusive. It’s not My Stupid Noise. It’s OUR Stupid Noise.’